Of the Diaspora, Marita Golden 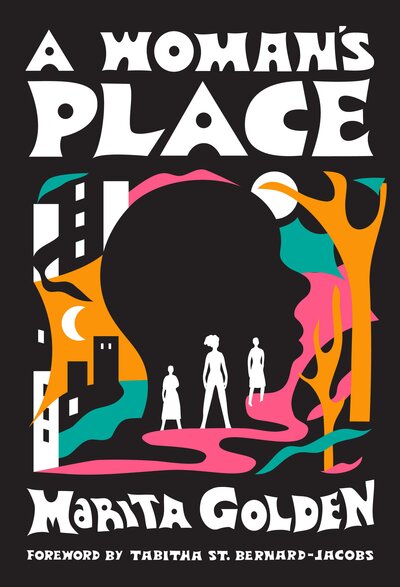 This is a preorder. This edition of A Woman’s Place will be released Summer 2022. Books will ship prior to release.

It is 1968 and everything about being a Black woman in America is changing. Three young women meet at a New England college and form a friendship that endures, heals, and dramatically shapes their lives. Faith, Crystal, and Serena each struggle to determine a path for themselves as they navigate expectations set by race, gender, and their families.

Published in 1986 after the award-winning autobiography Migrations of the Heart, A Woman’s Place was Marita Golden’s first novel. More than fourteen books in fiction and nonfiction, including Gumbo: An Anthology of African-American Writing co-edited with E. Lynn Harris, followed. Golden went on to create and helm the Hurston/Wright Foundation, which has become a literary rite of passage for such talents as Nicole Dennis-Benn, Brit Bennett, and Tayari Jones. A Woman’s Place is reprinted here as an esteemed addition to McSweeney’s Of the Diaspora series, edited by Erica Vital-Lazare, and opens with a new introduction by the author, with a foreword by Women’s March co-founder Tabitha St. Bernard-Jacobs.

Praise for A Woman’s Place

“A book that should be bought, read, and cherished, because it is a story of hope, a story of triumph and, above all, a testimony to resilience.”
—The Philadelphia Tribune

“A Woman’s Place is a wonder of a novel. Slim, spare, with beautiful simplicity, it manages to convey multitudes about friendship, ambition, desire, duty, inheritance, and especially womanhood. I loved the three Black women whose lives are imagined in these pages, each so different and compelling in their search for meaning and contentment yet united by their uncompromising intellects and humanity. Thirty-six years after its original publication, A Woman’s Place is all the more powerful for its enduring relevance and sense of urgency.”
—Bliss Broyard, author of My Father, Dancing

“I first discovered Marita Golden’s novel, A Woman’s Place as a college student and young writer in the early 1990s. I was starved for literature that not only echoed my own search for belonging, for connection, but that also, eschewing restrictive/constrictive racial tropes, reflected the complexity and beauty of Black women creating lives, imperfect as they may be, on their own terms. In A Woman’s Place, Golden’s masterfully constructed protagonists fully inhabit and tell their own stories; discover and map their own geographies. I am overjoyed to see this new edition of A Woman’s Place. I hope that it will become a welcoming space; a source of affirmation and celebration of Black women, a beautiful exploration of friendship, forgiveness and the perpetual journey of self-discovery for generations to come.”
—Natasha Tarpley, author of Girl in the Mirror: Three Generations of Black Women in Motion

“The gift of a Black woman’s friendship lies in the revelation of its permission; a permission that gives its recipient the joy of unraveling and being seen, through and through, for who we really are. More than we might be with even our lovers or our children, Black women and femmes are committed to each other’s healing through the transformative act of unconditional love. We cultivate spaces in which each of us can break, bend, and grow into that much more divinely complex version of ourselves, the one that lies outside the peripheries of marriage, legislation, religion, and any other kind of moral confinement designed to deny us the autonomy of our bodies, minds, and spirits. With the re-release of Marita Golden’s A Woman’s Place, a new generation of Black women and femmes are brought back to this age old truth: your real ‘ride-and-dies’ will always be there for you—even when they aren’t.

An enthralling dive into the minds of ‘young, talented, and Black’ college-educated women, post the pivotal signing of the Civil Rights Act in 1964, A Women’s Place reflects on the fictional inner-lives and friendships of three women who represent our still beloved Black femme archetypes—the innocent, the poet, and the revolutionary—all of whom stepped out as the first generation to emotionally and spiritually navigate the underbelly of patriarchal institutions in North America and abroad. Presciently putting the contemporary issues of today into context, Golden turns an astute eye to the ongoing fight for liberation, beautifully exemplifying how collective change is and has always been manifested through personal acts of defiance.

From the inherited longing for land ownership to the need to be sexually emancipated, the communal yearning to grow away from the societal requirements of marriage and mothering and pursue with fervor our own unique intellectual passions is what drives Golden’s A Woman’s Place—a novel that reads as the beating heart of every Black woman still burning with wild intentions and the impulse to define themselves, for themselves.”
—Faylita Hicks, author of HoodWitch

McSweeney’s Of the Diaspora is a series of previously published works in Black literature whose themes, settings, characterizations, and conflicts evoke an experience, language, imagery, and power born of the Middle Passage and the particular aesthetic which connects African-derived peoples to a shared artistic and ancestral past. The series is edited by writer Erica Vital-Lazare, a professor of creative writing and Marginalized Voices in literature at the College of Southern Nevada.

To order the first three titles of our Of the Diaspora series in one bargain-priced bundle, click here.