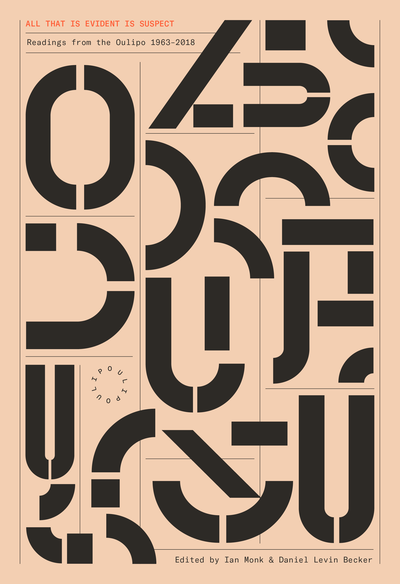 Since its inception in Paris in 1960, the OuLiPo—ouvroir de littérature potentielle, or workshop for potential literature—has continually expanded our sense of what writing can do. It’s produced, among many other marvels, a detective novel without the letter e (and a sequel of sorts without a, i, o, u, or y); an epic poem structured by the Parisian métro system; a story in the form of a tarot reading; a poetry book in the form of a game of go; and a suite of sonnets that would take almost 200 million years to read completely.

Lovers of literature are likely familiar with the novels of the best-known Oulipians—Italo Calvino, Georges Perec, Harry Mathews, Raymond Queneau—and perhaps even the small number of texts available in English on the group, including Warren Motte’s Oulipo: A Primer of Potential Literature and Daniel Levin Becker’s Many Subtle Channels: In Praise of Potential Literature. But the actual work of the group in its full, radiant collectivity has never before been showcased in English. (“The State of Constraint,” a dossier in issue 22 of McSweeney’s Quarterly Concern, comes closest.)

Enter All That is Evident is Suspect: the first collection in English to offer a life-size picture of the group in its historical and contemporary incarnations, and the first in any language to represent all of its members (numbering 41 as of April 2018 ). Combining fiction, poetry, essays and lectures, and never-published internal correspondence—along with the acrobatically constrained writing and complexly structured narratives that have become synonymous with oulipian practice—this volume shows a unique group of thinkers and artists at work and at play, meditating on and subverting the facts of life, love, and the group itself. It’s an unprecedentedly intimate and comprehensive glimpse at the breadth and diversity of one of world literature’s most vital, adventurous presences.