AT HOME ON THE RANGE 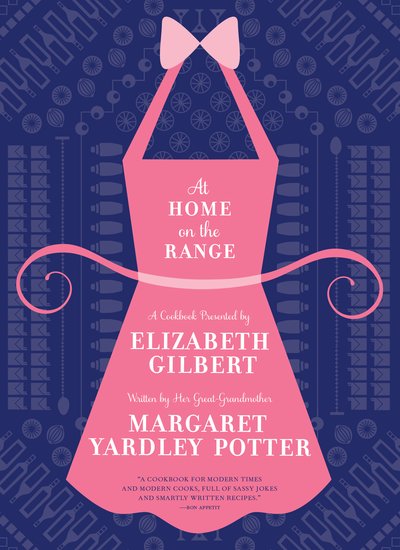 A cookbook far ahead of its time, Margaret Yardley Potter’s At Home on the Range, originally published in 1947, was rediscovered by the author Elizabeth Gilbert—who just so happens to be the author’s great-granddaughter. Gilbert’s “Gima” was no ordinary housewife: at a time when the American dinner table was hurtling towards homogeny, Potter espoused the importance of farmers’ markets and ethnic food (when pizza was considered ethnic), derided preservatives and culinary shortcuts, and lustily celebrated her epicurean adventures. Part scholar, part crusader, and always throwing parties, Potter could not but be a source of Gilbert’s own love of food, and her warm, infectious prose.

Praise for At Home on the Range:

“This book is a beautiful time capsule that looks back to the roots of American gastronomy, when the values of gardening and fresh ingredients were the primary inspiration. Margaret Yardley Potter’s warm, witty stories and recipes show us that our great-grandmothers instinctually understood that food is central to a life well-lived.”
—Alice Waters

“Author Elizabeth Gilbert (A Skeptic Makes Peace with Marriage) does a wonderful service by bringing back the opinionated, modern-for-its-time cookbook of her eccentric great-grandmother.”
—Publishers Weekly

“Both artifact and artfully useful…We’re not surprised that Gilbert, who celebrates her “Gima” throughout, comes from such feisty stock.”
—Oprah Magazine

“This is a cookbook for modern times and modern cooks, full of sassy jokes and smartly written recipes.”
—Bon Appetit

“Featuring a comprehensive and moving introduction from Potter’s great-granddaughter, Elizabeth Gilbert, At Home on the Range is an eminently usable and humorous cookbook. But it’s also more than that: it’s an heirloom, an into-the-wee-hours dinner with relatives and ancestors, a perfect gift for anybody with a stove or a mother.”
—Tattered Cover Bookstore

“’At Home on the Range’ is, in fact, a cookbook. But it is so much, much more than a cookbook. It is a memoir of one woman’s life, her marriage, and her full and happy years taking care of a family. It is also the encapsulation of the spirit of this particular woman—Margaret Yardley Potter of Philadelphia, who died in 1955—on the page, in such full-flowered glory that she seems by the close of the volume to be someone that we know intimately.”
—Buffalo News

“This is not just a book of recipes (though it has plenty of those, a perfect recipe for pressed chicken among them), but also a cookbook for life.”
—GQ

“[Potter] is a wonderful, entertaining writer and a keen observer.”
—The Kitchn

“Adventurous and funny, she could have drunk and smoked Elizabeth David, M.F.K. Fisher and probably even Dorothy Parker under the table.”
—New York Times Book Review

“Yardley Potter’s prose is laced with literary references and is as much fun to read as her dinner parties must have been to attend.”
—The New Yorker

“Bracketed by Gilbert’s affectionate commentary, At Home is a warm and witty memoir that captures Potter’s spirited approach to cooking and just about everything else… A book for all ages. What a gem.”
—The Philadelphia Inquirer