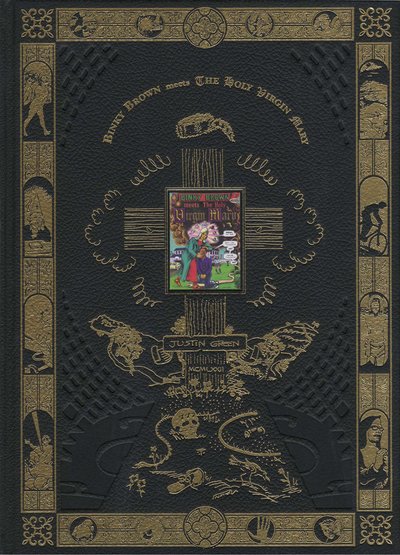 A lost classic of underground cartooning, Binky Brown Meets The Holy Virgin is the very first of two genres: the autobiographical graphic novel and a secular exposition of Obsessive-Compulsive Disorder. Through his cartoon doppelganger Binky, Justin Green explores the relationship between sexual repression and the formation of homemade coping strategies which manifest as spectacular neurotic symptoms.

Occasionally sexually explicit, hilarious and provocative, with artwork that veers wildly between formalist and hallucinogenic, this work has been cited in many reference books as being a cornerstone of the Underground Cartooning genre.

We’ve reproduced this definitive edition by taking the actual original art from which the ‘72 Last Gasp newsprint comic was printed, and reproduced it exactly as-is, with all the ambient marks and corrections that were germane to the craft in that era. Green has also added an insightful and illustrated Afterword, which discusses the cultural context in which his magnus opus was created, as well as the recent medical advances that have revealed the biochemical origin of Obsessive Compulsive Disorder. The result is a collector-worthy volume lavishly produced as a hardback edition, with a Foreword by Art Spiegelman.

“Justin Green—he’s out of his mind. I love every stroke of his nervous pen, every tortured scratch he ever scrawled. He was among the top storytelling artists of the first wave of “underground” comics, a darkly humorous social commentator, and the FIRST, absolutely the FIRST EVER cartoonist to draw highly personal autobiographical comics. Binky Brown started many other cartoonists along the same path, myself included. Few have come close to him in revealing themselves in this medium. For me, there’s nothing more enjoyable than the confessions of a tortured soul, if the story is well-told, entertaining, honest, and then funny on top of it. If that’s what you’re looking for, and if you like it in comic book form, Justin Green is the first and the best!” —R. Crumb

“Thank God that it’s getting harder to imagine a time when comics were a lowly commercial hack-job for illustrators who couldn’t find work anywhere else. It’s even harder to imagine the effect of a comic book in such a cultural climate by an artist who tore himself to pieces right on the page, trying to get at the core of something that was literally consuming him, but this is what Justin Green did. With Binky Brown, comics went practically overnight from being an artform that saw from the outside in to one that sees from the inside out. His internal struggle can practically be felt in the drawings themselves, the style sometimes changing from panel to panel—sometimes even within the panels themselves—all in an effort to simply arrive at The Truth. Comics wouldn’t be what they are today without this book, and this new edition places it in its proper place in the comics literary canon. Thank God for Binky Brown. And thank God for Justin Green.” —Chris Ware

“It must have been hell for you to get it exactly right… I could see that the work came from a permanently damaged brain.” —Kurt Vonnegut

“I like it very much, but I don’t get the slang.” —Federico Fellini