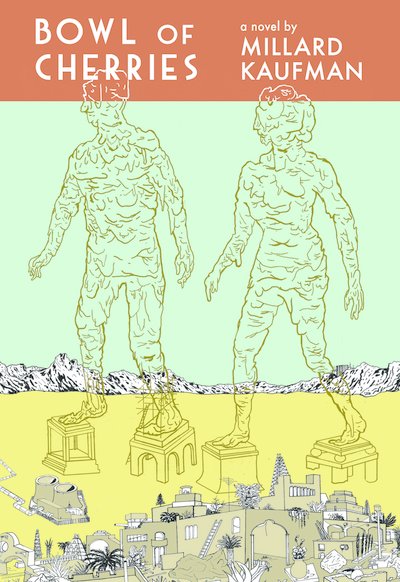 Kicked out of Yale at age fourteen, Judd Breslau falls in with Phillips Chatterton, a bathrobe-wearing Egyptologist working out of a dilapidated home laboratory. There, young Valerie Chatterton quickly leads Judd away from his research and into, in order: the attic, a Colorado equestrian ranch, a porn studio beneath the Brooklyn Bridge, and a jail cell in southern Iraq, where we find him awaiting his own execution while the war rages on in the north. Written by a ninety-year-old debut novelist, ex-Marine, two-time Oscar nominee (screenwriting, Bad Day at Black Rock and Take the High Ground!), and co-creator of Mr. Magoo, Bowl of Cherries rivals the liveliest comic novels for sheer gleeful inventiveness — this is a book of astounding breadth and sharp consequence, containing all the joy and derangement and terror and doubt of adolescence and of our time.

Read more about Bowl of Cherries and Millard Kaufman here.

Praise for Bowl of Cherries

“Nonagenarian Kaufman-twice nominated for screenwriting Oscars in the 1950s and a cocreator of Mr. Magoo-makes his fiction debut with this irresistible comic novel, a bawdy, original coming-of-age tale. Kaufman brings bright, resourceful Judd Breslau to vivid life, giving him a striving nature that always leads to trouble. After dropping out of Yale at 14, Judd moves into the crumbling mansion of nut-job Egyptologist Phillips Chatterton, where he joins a phalanx of oddball thinkers working on a quixotic project to redesign human society. A fringe benefit is Chatterton’s daughter, Valerie, over whom Judd goes ga-ga. Both Judd and Valerie end up in New York, where Judd interviews with a shady corporation seeking a revolting economic opportunity in war-torn Iraq. So it’s off to the hilariously backwards Coproliabad, where Judd runs afoul of the new sheikh, who wants Valerie for his queen. In fact, Judd, awaiting execution, narrates the whole book from a fetid jail cell. Kaufman’s screwball sensibility, relish for language, gleeful vulgarism and deep sympathy for his characters make this novel an unprecedented joyride. Whether it’s due to his being alive for 90 years or not, Kaufman’s book is shot through with worldly wit and a keen sense of the humor in human foibles.”
—Publishers Weekly (Starred Review)