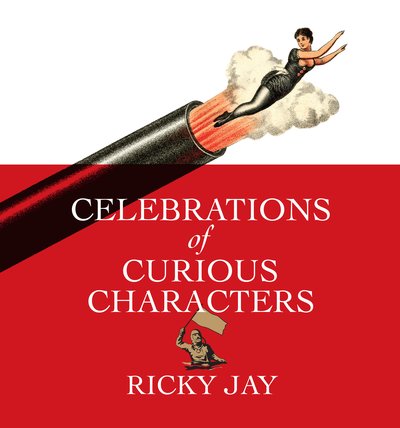 Celebrations of Curious Characters cracks open the personal vaults of Ricky Jay—raconteur, historian, and one of the world’s great sleight-of-hand artists—exposing a wonderful world of amusing and arcane knowledge. Adapted from his popular radio series “Jay’s Journal of the Air,”Celebrations of Curious Characters features one-page anecdotes of mind-bending performers (limbless jugglers, banjo-picking birds, Anglo-Texan saxophone-playing siamese twins) paired with engravings, mezzotints, and broadsheets from the author’s remarkable collection. You’ll find engaging vignettes on a daunting variety of topics: musical prodigies, cannon-ball catchers, conmen, card cheats, and performing politicians. Plus, a man who made a model of Lincoln Cathedral out of 1,000,800 bottle corks; a woman continuously pregnant for six-and-a-half years; a theatrical strong man who became the world’s leading Egyptologist; and a healthy number of digressions on time, money, and the argot of thieves.

For a bit more, check out the New Yorker’s interview with Ricky Jay.

“Never, I repeat never, in the annals of entertainment has one man devoted himself more dutifully, studied more scrupulously, and documented so diligently these bizarre and astonishing feats of physical and mental derring-do than the man they call ‘America’s Scholar of the Unusual’—magician, author, bon vivant, raconteur, prestidigitator extraordinaire, and a personal friend to whom I no longer owe a favor—Ricky Jay.”
—Steve Martin