THE END OF WAR (PAPERBACK) 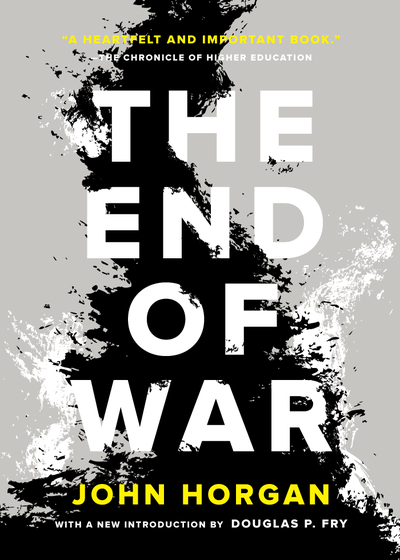 War is a fact of human nature. As long as we exist, it exists. That’s how the argument goes.

But longtime Scientific American writer John Horgan disagrees. Applying the scientific method to war leads Horgan to a radical conclusion: biologically speaking, we are just as likely to be peaceful as violent. War is not preordained, and furthermore, it should be thought of as a solvable, scientific problem—like curing cancer. But war and cancer differ in at least one crucial way: whereas cancer is a stubborn aspect of nature, war is our creation. It’s our choice whether to unmake it or not.

In this compact, methodical treatise, Horgan examines dozens of examples and counterexamples—chimpanzees and bonobos, warring and peaceful indigenous people, World War I and Vietnam, Margaret Mead and General Sherman—as he finds his way to war’s complicated origins. Horgan argues for a far-reaching paradigm shift with profound implications for policy students, ethicists, military men and women, teachers, philosophers, or really, any engaged citizen.

You can read excerpts from The End of War on the Internet Tendency and in the Atlantic.

Praise for The End of War:

“I’m heartened by this thoughtful, unflappable, closely argued book. The End of War gives us new ways to understand and resist the specious arguments of inevitabilists and professional weaponeers.”
—Nicholson Baker

“Winsomely and persuasively, John Horgan suggests that the world may be headed toward peace. This book is straightforward, drawing on the best scientific evidence available, examining the writings of the best scholars on both sides of these issues. Horgan believes human destiny is not predetermined. Human choices matter. We are encouraged not because of pious idealistic hopes, but because the best evidence demonstrates that the prospects for peace are eminently realistic.”
—Dr. James C. Juhnke

“This is a heartfelt and important book, one that largely succeeds: at least, in making its point. Whether it is comparably successful in its deeper goal—changing peoples’ minds—another matter, although let’s hope that it is.”
—David Barash, The Chronicle of Higher Education