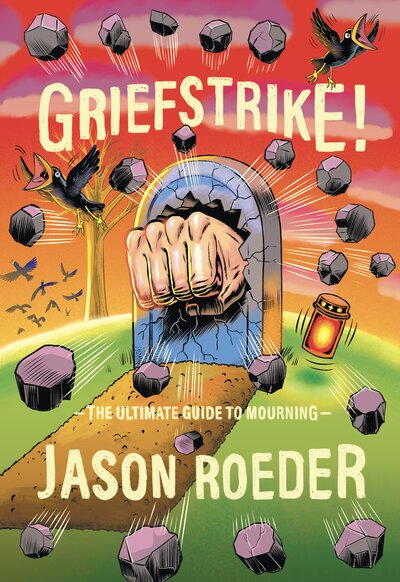 For a very limited time preorder a copy of Jason Roeder’s upcoming Griefstrike!, signed! While the book is officially out January 2023, these signed copies will be sent to McSweeney’s readers in time for domestic holiday shipping 2022.

When it comes to grief, there’s no room for second best. Sure, there are other guidebooks aimed at helping you cope with the emotional and practical challenges of losing a loved one. None, however, have been written by a comedy writer whose “therapeutic training” went no further than an undergraduate degree in psychology, and who lived through this terrible experience and emerged intact enough to write a bunch of jokes about it. What The Daily Show’s America (The Book) was to civics and The Onion’s Our Dumb Century was to the history of the twentieth century, Jason Roeder’s hilarious (and often moving) Griefstrike! is to death, mourning, and somehow getting on with your life.

Praise for Griefstrike! The Ultimate Guide to Mourning

“This is the hilarious and informative grief handbook I didn’t know I needed. But hopefully not too soon.”
—Judd Apatow, author of Sicker in the Head: More Conversations about Life in Comedy

“Griefstrike! is full of genuinely hilarious jokes (my favorite kind of jokes) as well as genuinely poignant feelings (a top five kind of feelings at minimum). Reading it will bring you joy and comfort, and then if you’re anything like me, you’ll have a slight spiral about whether it’s messed up to feel any happiness at a time like this.”
—Josh Gondelman, author of Nice Try: Stories of Best Intentions and Mixed Results