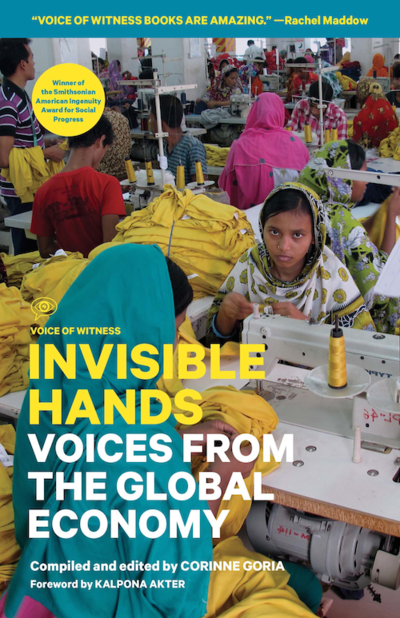 The men and women in Invisible Hands reveal the human rights abuses occurring behind the scenes of the global economy. These narrators—including phone manufacturers in China, copper miners in Zambia, garment workers in Bangladesh, and farmers around the world—reveal the secret history of the things we buy, including lives and communities devastated by low wages, environmental degradation, and political repression. Sweeping in scope and rich in detail, these stories capture the interconnectivity of all people struggling to support themselves and their families. Narrators include:

KALPONA, a leading Bangladeshi labor organizer who led her first strike at 15, while working in a garment factory. As an adult, she now faces arrest, torture, and constant surveillance for her activism.

HAN, who, as a teenager, began assembling circuit boards for an international electronics company based in Seoul. Though she was paid a living wage, she was one of many co-workers who developed cancers or tumors at a young age.

ALBERT, a copper miner in Zambia who, during a wage protest, was shot by representatives of the Chinese-owned mining company that he worked for. Desperate for a living wage, Albert attempted to resume work with the company after months in the hospital.

SANJAY, who grew up in the shadow of the Bhopal chemical disaster, one of the worst industrial accidents in history. As an adult, Sanjay fights for recognition of the damage still wrought on his community even decades after the gas leak that killed tens of thousands.

About the Editor: Corinne Goria is a writer, lawyer and Assistant Editor of Underground America: Narratives of Undocumented Lives, Voice of Witness’ collection of oral histories from undocumented immigrants in the United States. She is based in San Diego.

About the Forwarder: Kalpona Akter is an internationally-recognized labor rights advocate. She is the executive director of the Bangladesh Center for Worker Solidarity (BCWS) and is herself a former child garment worker. BCWS is regarded by the international labor rights movement as among the most effective grassroots labor organizations in Bangladesh. Kalpona’s work has been covered extensively by local and international media, including ABC, BBC, the New York Times, and the Wall Street Journal.