IT CHOOSES YOU (PAPERBACK) 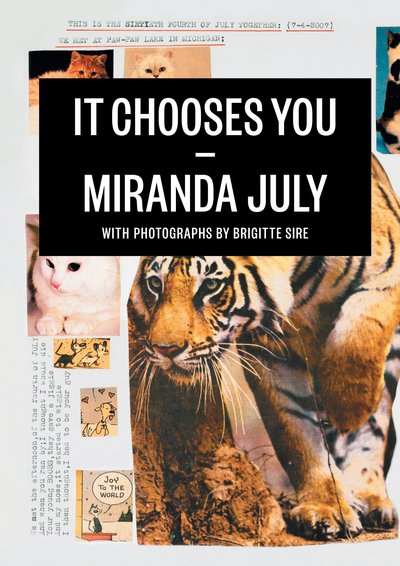 In the summer of 2009, Miranda July was struggling to finish writing the screenplay for her much-anticipated second film. During her increasingly long lunch breaks, she began to obsessively read the PennySaver, the iconic classifieds booklet that reached everywhere and seemed to come from nowhere. Who was the person selling the "Large Leather Jacket, $10"? It seemed important to find out—or at least it was a great distraction from the screenplay.

Accompanied by photographer Brigitte Sire, July crisscrossed Los Angeles to meet a random selection of PennySaver sellers, glimpsing thirteen surprisingly moving and profoundly specific realities, along the way shaping her film, and herself, in unexpected ways.

Elegantly blending narrative, interviews, and photographs with July's off-kilter honesty and deadpan humor, this is a story of procrastination and inspiration, isolation and connection, and grabbing hold of the invisible world.

Check out this preview of the paperback edition!

Read Miranda’s GQ (UK) interview. You can get the inside scoop on the book with this series of excerpts on the New Yorker's Book Bench, or find about the book-inspired store that July started. And, to hear it from July herself, check out this Book Beast interview.

Praise for It Chooses You:

Voted a "Can't Miss Read for December 2011" by Oprah Magazine.

"July, an artist, writer, performer and film-maker who creates work 'about people trying to connect in one way or another and the importance of that' has moved from casual wondering to something substantive and extraordinary."
—Hermione Hoby, The Guardian

"Captivatingly original… a sort of documentary memoir in which July, an actor and director as well as a writer, affectionately celebrates the upside of eccentricity."
—Gale Walden, O magazine

"From the outside what she’s doing is such a small and seemingly trivial thing, but from the inside of it, it’s absolutely everything. It becomes grand in scale and importance. Everything hinges on July’s ability to not only make it through the Pennysaver obstacle course she’s set up for herself, but to make sense of it at the end." —Sundance Channel