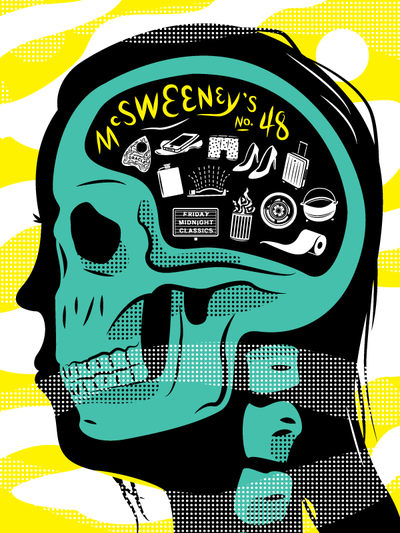 With sixteen new stories and a full-length screenplay, McSweeney’s 48 was just too much for a single book to hold—a wild leviathan, you could say, whose tongue we could not tie down with a rope. (Job 41:1 is now believed to refer to this issue.) We were, however, able to split it into two books, and the results are terrific. In the first, we’ve got stunning work from Kelly Link, Rebecca Curtis, Etgar Keret, and Ismet Prcic, as well as stories of blind boyfriends and dead tourists and doomed Moldovan press junkets; in the second, we’ve got the delightfully weird debut screenplay of none other than Boots Riley, frontman of the Coup. Are there stories from Croatia, also? Are there love stories set amid street protests and ghost stories set amid nudist colonies? Is the issue, as a whole, so dazzling that you will feel a little bit dizzy afterward? There are, and it is, and we’re very excited to be bringing this one to you.

You can read Kelly Link’s story, “I Can See Right Through You,” in its entirety here.

Sorry to Bother You, a full-length screenplay by Boots Riley

Only Good for a Day by Julia Slavin

The Lazarus Correction by Dan Keane

I Can See Right Through You by Kelly Link

One, Maybe Two Minutes from Fire by Téa Obreht

an excerpt from All My Puny Sorrows by Miriam Toews

The Dentist on the Ridge by Dave Eggers

Alienation and Absurdity, at Home and Abroad: Six Stories from Croatia
With photos by Boris Cvjetanović

Introduction: The New Wave of Croatian Writing by Josip Novakovich

It’s Me by Damir Karakaš