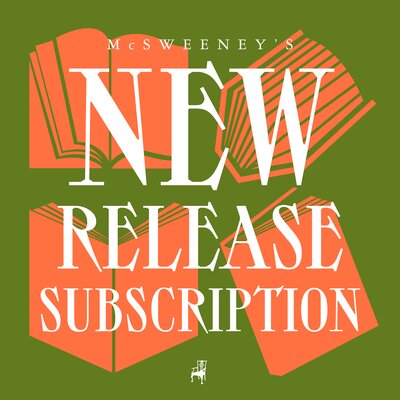 This is the page for McSweeney’s New Release Subscription, formerly known as McSweeney’s Book Release Club. Looking to upgrade to a twelve-month membership to our new Virtual Book Club? Click here. If you’re already a subscriber and would like to upgrade, email bookclub@mcsweeneys.net with the subject line “Book Club Upgrade.” We’ll send all info on virtual meetings to both New Release subscribers and official Book Club members.

Get our next six books sent straight to your mailbox prior to or immediately upon publication with our official McSweeney’s New Release Subscription. On their own these books can retail for anywhere from $16-$30, so dollar for book, McSweeney’s New Release Subscription is far and away the best deal we’ve ever put together, and very possibly the best subscription deal out there. With a future full of uncertainty at home and abroad, we’ve got a packed schedule of exciting new releases planned to make sure that one thing you CAN rely on is amazing new books from McSweeney’s Publishing.

The Every by Dave Eggers
When the world’s largest search engine/social media company, The Circle, merges with the planet’s dominant e-commerce site, it creates the richest and most dangerous–and, oddly enough, most beloved–monopoly ever known: the Every.

Set in Pakistan, these award-winning stories follow people living on the brink of abandonment—in their personal relationships and their place in the world. A mother, coping with the sudden death of her son, uncovers long buried secrets in his absence. An anguished girl grabs a chance for a life beyond the orphanage walls where she lives and discovers the price of freedom. A young couple tries to keep their fraught relationship steady as a heat wave engulfs their city. A son returns to visit his aging parents while beset with memories of a troubled childhood. And two thieves find themselves in a situation more precarious by the minute, and more dangerous than their original mission.

Ali’s characters battle loneliness and in their fight reveal surprising vulnerabilities and an astonishing measure of hope.

“The stories in People Want to Live are ones of aftermath—a lost child, an ambition dashed, an irrevocable mistake. Farah Ali writes with a precise and profound understanding of the most vital dimensions of the human experience, and these stories illuminate how connection can be found in even the bleakest moments. People Want to Live is the work of a thrilling and essential new voice.”
—Laura van den Berg, author of I Hold a Wolf by the Ears

IMPORTANT LOGISTICAL INFORMATION: All subscriptions placed by November 1 will start with The Every. Exact book order liable to change due to unforeseen delays. All McSweeney’s New Release Subscriptions automatically renew after six books. Before the start of each six-book renewal, and in the case of any future rate changes, we will notify you via email. If you’d like to cancel your subscription at any time prior to its auto-renewal, you can log in to your account and adjust your subscription settings. Or send an email to custservice@mcsweeneys.net with the subject line “End New Release Autorenew.” Or call (415) 642-5609. Refunds will be accepted only up until the first issue of your renewal is shipped. Any subscription purchased with the “gift” option marked at checkout will not be enrolled in autorenew.