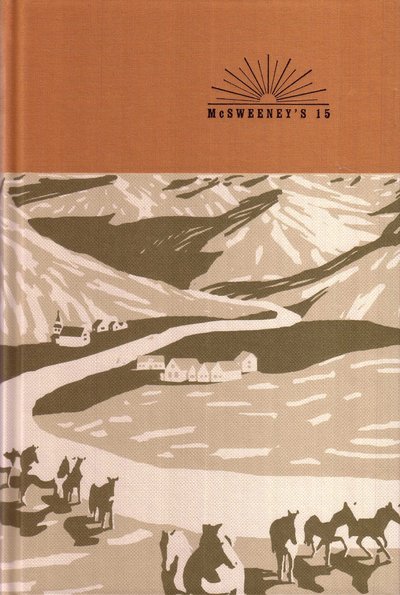 Issue 15 is also known as the "Icelandic Issue." Printed in Iceland, half of the stories are written by actual Icelandic writers. And the kicker? It also comes with a Icelandic tabloid mini-mag filled with words you won't understand and images that speak for themselves.

Included in this issue are new stories from Roddy Doyle, Steven Millhauser and many exceptional newcomers.

Hardcover, bound in fine cloth. This issue makes us want to sit by a fireplace on a snowy day.

Stephen Millhauser – A Precursor of the Cinema
Every great invention is preceded by a rich history of error.

Seth Fried – Lie Down and Die
My father was shot and killed the day after I was born.

Roddy Doyle – I Understand
This morning, I stand at the bus stop. I have been in this city three months. I begin to understand the accent.

Kiara Brinkman – Counting Underwater
The boy has asthma. At the playground, hi smother has him trained to come over to the bench and rest every twenty minutes or so.

Roy Kesey – Asunción
It is a beautiful city: flowering jacarandas, old yellow street-cars, Sunday afternoons in the plaza rich with heat and birdsong.

Judy Budnitz – Sales
My brother puts the new one in the pen out back with the other salesmen.

Eric Hanson – Midnight
During the reign of Stalin, the efficiencies of power reached such a level of refinement that men in gray suits were sent from the Hoover Institution in California to learn how it was done.

Padgett Powell – Manifesto
There’s about fourteen ounces of this left.

Benjamin Rosenbaum – Orphans
I have bought the elephant a new green suit. I have bought him a car. I buy him anything he likes.

The latest in contemporary Icelandic fiction

Birna Anna Björnsdóttir – Introduction: The Season of Jólabókaflódid
We sometimes claim that everyone in Iceland is a writer.

Sjón – Fridrik and the Eejit
The world opens its good eye a crack.

Gyrdir Eliasson – Seven Stories
Up under the roof in the house over there, the one with the climbing plants winding round it, lies a young man in a gray iron bed suspecting that he is going to die soon.

Bragi Ólafsson – My Room
On the fence by my old house on Hagamelur Street someone has written in black marker: “The tidemark of loneliness.”

Einar Már Guomundsson – Uninvited
As I run down the freshly polished stairs with father’s hammer in one hand, Oli is sitting on the oil tank outside the house.

Póragrinn Eldjárn – A Rush of Wings
She had often heard stories about eagles taking lambs and even children, but she did not see it as it arrived and had no time to be afraid, let alone to try to escape or shoo it away.

Guobergur Bergsson – A Room Underground
It had taken me a considerable time to find a suitable room where we could meet inconspicuously, because it had to be a basement flat where you could walk straight in off the street.

Birna Anna Björnsdóttir, Oddny Sturludóttir, and Silja Hauksdóttir – Nerve City
I take a stroll through the smallest campus in the world.

Andri Snœr Magnason – Interference
When the arctic terns failed to find their way home one spring, appearing instead like a storm cloud over the center of Paris and pecking at the heads of passersby, many people thought the end of the world was nigh, that this would be the first in a long series of calamities.