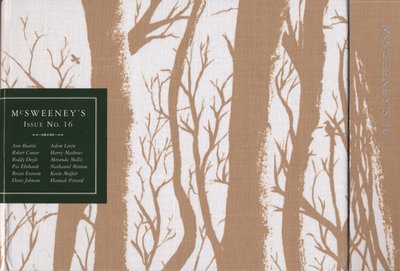 Issue 16 presents new stories from McSweeney's regulars like Roddy Doyle and Denis Johnson, and exploits a never-before-seen tripartite format to bring you a hilarious Ann Beattie novella and a special deck-of-cards story from Robert Coover, one of the great masters of American experimental fiction. This issue uses more cloth than any issue to date. Also, it comes with a comb.

Brian Evenson – Mudder Tongue
There came a certain point, in his speech, in his confrontation with others, in his smattering with the world, that Hecker realized something was wrong.

Nathaniel Minton – Viva Mesopotamia
Stanley Ellsworth, the anthropologist who floated deep into hostile jungles along South American rivers, developed gout in his foot, and a young doctor named Mettergit amputated and mummified it using ancient techniques he learned from an issue of National Geographic maazine.

Adam Levin – Considering the Bittersweet End of Susan Falls
Susan Falls hates the flying dreams. She wakes up and she can’t walk, which is beside the point.

Miranda Mellis – The Doctor of Mental Health
I am a fifty-year-old vegetarian man in decent health, though somewhat sedentary.

Kevin Moffett – The Medicine Man
When I’m low, I go to Bel-Air Plaza to look for the medicine man, Broom.

Pia Z. Ehrhardt – Driveway
Twinette is one of the moms on my son Eric’s baseball team. She took off to Colorado with another man and left her three boys in New Orleans with her husband.

Roddy Doyle – Home to Harlem
He can’t find himself on the registration form.

Ann Beattie with Harry Mathews - Mr. Nobody At All

I’m really happy to be here today, even though I’m broken-hearted.

All on one summer's day, the King of Hearts calls for the tarts baked for him by his Queen, only to find they have been stolen.