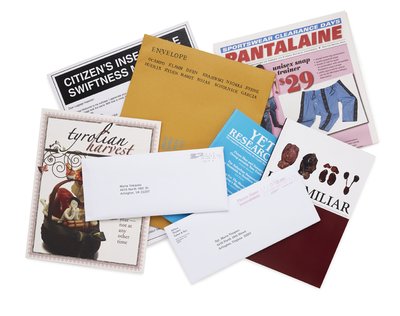 Issue 17 is not an ordinary issue of McSweeney's. It is, however, an ordinary-looking bundle of mail, stacked and rubber-banded, containing the usual items: a recent issue of Yeti Researcher; a large envelope, called Envelope, containing fine oversized reproductions of new art; a sausage-basket catalog; a flyer for slashed prices on garments that are worn by more than one person at a time; a new magazine of experimental fiction called Unfamiliar; a couple letters… the usual. This might be the strangest and most pleasure-giving issue yet.

Sarah Manguso – But The Order Of Lives Is Apparent
Oscar Shapiro, my great-uncle, was the most famous person in my family. I saw him four times in my life.

Kenneth Koch – The Soviet Room
Every house – and apartment large enough – used to have what was called a Soviet room, where, if they liked, people could sit around and talk about Communism.

Judy Budnitz – Women and Men
Men bumped into Women at the grocery store. Their carts crashed together with a horrible screech. “It’s so great to see you again! You look great!”

Eric Hanson – Handlebar
Two weeks after he made his second inaugural address, during which he winked at practically everybody in the crowd, and at folks in Colorado Springs and Provo and Waco and Oklahoma City who were watching on TV at home, and after he made his promise of HDTV, direct by satellite from God, to all believers who voted for him for President, George W. Bush showed up on Oprah Winfrey’s TV show. He was wearing a handlebar mustache.

Stephen Elliott & Lauren McCubbin – Eye First Against the Wall Under Fire
Here we go. The air sirens have been ringing for half an hour and it’s become clear they aren’t going to stop.

Katie Wudel – A Lack of Mountains
I’d never stolen a woman before. It was simple. She was blind.

Kirby Olson – Memoirs of an Alaskan Intern
An oil pipeline had burst due to a foreman’s careless flick of a cigar, scarring the earth for hundreds of miles and causing burn victims to flood into the emergency room.

Avital Gad-Cykman – Bits of Quality Time
When Mother and Father say that “The Lord of the Rings” is a violent film, I tell them they are old-fashioned and overly sensitive.

Rebecca Curtis – The Sno-Cone Cart
I wanted the Sno-Cone Cart for my niece because besides being her aunt, I am also her godmother. If my sister and her husband died, I would be the mother.

Gabe Hudson – The Draftburger
I stood poised in the open hatch of the plane, my muscular torso enveloped by the cumbersome suicide vest.
John Haskell

John Haskell - Marguerite’s Cat
When Marguerite called up and said her cat died I didn’t think it was a problem.

Yeti Researcher: The Magazine of the Society for Cryptic Hominid Investigation

Erik Bluhm – The Suburban Sasquatch: Elusive Hominids in Southern California
Every part of the world has its own mystery hominid. Yetis traipse the Himalayan highlands, the Yowie roams the Australian outback, and bands of Agogwe make playful raids on remote villages in central Africa.

J. Silver & Joshuah Bearman - Gunning for the Martyr: A Look at Bigfooting’s Biggest Dilemma
Over the twelve years Rusty Garold has looked for sasquatch, he says he as seen hundreds of footprints, dozens of scats, even a couple of nests.

Jim Ruland - Ecce Chemo: What Did The World’s Most Famous Mountaineer Discover in the Himalayas?
Reinhold Messner has spent more time above 20,000 feet than any other man in history.

Sometimes I try to show my students the power of the story by telling them one.