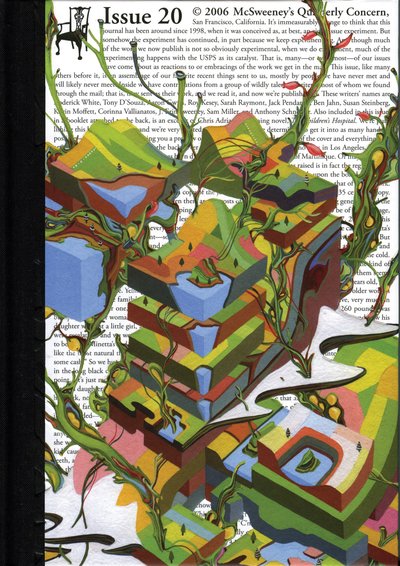 Every fourth page is a full-color figurative painting, each one by an excellent artist. The other three pages have fiction on them, with only one color but lots of words, including punched, pants, and Puerto—that’s actually just the first page. After that, there are stories exploring animal-plant romances, psycho librarians, and passive-aggressive ventriloquism. No fewer than two dictators appear as protagonists. And after all that, loosely glued to the inside back cover, there’s a fifty-page booklet containing a harrowing excerpt from Chris Adrian’s The Children’s Hospital, which will be out from McSweeney’s Books in October. A handsome, handsome issue, brimming with fulfilling things.

Susan Steinberg – To Sit, Unmoving
A man grabbed my father by his shirt. Then he punched my father’s face.

Kevin Moffett – Statement of Purpose
The two of them, Ben and Adria, meeting in a manatee pool.

Ben Jahn – City Water
Spring came and Pop sold half the flock and took his preaching on the road.

Tony D’Souza – The Man Who Married a Tree
Once there was this man, came one day to our town. Drank in the bar evenings, kept to himself.

J. Erin Sweeney – Terminal
Say a rising movie star visited a children’s hospital and a little boy fell in love with her and decided that she was his destiny.

Sarah Raymont – God and the Coconuts
When God gave me my own island, He said, take this island and make it yours.

Jack Pendarvis – The Big Dud
Dudley Durden, 50, was the only reporter for the Lumber Land Monitor in Lumber Land, Alabama, a pine mill town owned historically by the Cuff family.

Roy Kesey – Loess
-A few questions first, if I may.

Anthony Schneider – Houses for Fishes
While we were talking, I switched on the television and imagined that your words were being spoken by the woman in the sitcom and, when she was not in the scene, by one of the men who remained.

Roderick White – Elsewhere
You die and go to heaven. Heaven is a long, white hallway with many rooms. The Baptists are in one room, the Jews in another. It’s a long hallway. At the very end are the Mormons. “You must be quiet with passing this door,” they tell you when you arrive, “because the Mormons think they’re the only ones here.”

Aaron Gwyn – Mate
Dennis and I are playing chess when the guards bring Jingo in.

Sam Miller – The King’s Book
Today I had a visit in my cell from some very self-important men who had many questions which, presumably, they thought to be very provocative and profound, but which ultimately bored me and took me away from the work that has become all I have left: my most recent novel. Dedicated, of course, to you.