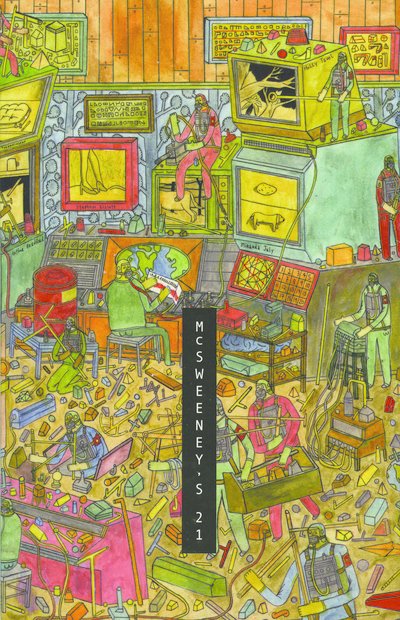 With work by Roddy Doyle, Stephen Elliott, Peter Orner, Joyce Carol Oates, Yannick Murphy, and Miranda July, as well as the triumphant return of Arthur Bradford and stories concerning fistfighting Mormons, New Zealand police malfeasance, and a man named Trang, and with all of those works interspersed with heartfelt letters to Ray Charles and storyboards by some of the finest pen-and-ink artists of our day, our twenty-first issue is sure to be one of our best assemblages yet.

Chloe Hooper - The Tall Man
"Traveling to Palm Island the pale green sea is so radiant and so fecund, and the plane flies so close to it, you see seals, and what might be dugongs and giant turtles."

Stephen Elliott - Hate to Be Alone
"On the fourth day together we broke up."

Roddy Doyle - The Pram
"Chapter One: Alina loved the Baby."

Rajesh Parameswaran - The Strange Career of Doctor Raju Gopalarajan
"None of us were surprised when we heard Gopi Kumar had been fired from his job at CompUSA."

Miranda July - Majesty
"I am not the kind of person who is interested in Britain’s royal family."

Arthur Bradford - Snakebite
"We were riding in a car together, Clifford, his wife Jolene, and I."

Yannick Murphy - The Lost Bread
"We are in search of a breed that is most likely lost."

A. Nathan West - The Balloon
"I never enjoyed visiting my grandparents."

Holly Tavel - Last Words
"It was not I who killed the last remaining Slaty-Crowned Bulbul, says the Hyacinth Macaw, though I was there when it happened."

Greg Ames - I Feel Free
"I’d been dating Karen for two weeks, maybe three, when she told me an ex-lover was stalking her."

Peter Orner - Pampkin’s Lament
"Two-Term Governor Cheeky Al Thorstenson was so popular that year that his Democratic challenger could have been, my father said, Ricardo Montalban in his prime and it wouldn’t have made a five-percent difference."

Christian Winn - Rough Cut
"The Mormon has fought before."

[Each story is followed by a letter received by the office of Ray Charles at various dates throughout 1999. Names have been obscured to protect privacy, but the letters are entirely authentic.]