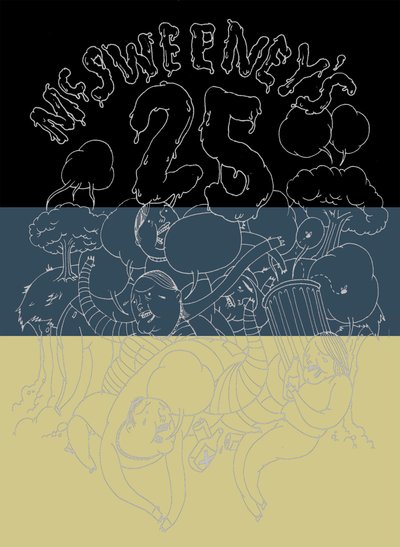 If issues were anniversaries, this one would have to be printed on silver plates. You could melt it in some sort of forge and then pound it on an anvil until you had a set of earrings. Instead, it's a hardcover book with stories by a few of our old favorites—Steven Millhauser, Joyce Carol Oates, Padgett Powell—and more than half a dozen others, investigating everything from ape men to unlucky island-hoppers to what happens when Canadians go AWOL in Bosnia. Pound this one on an anvil and it'll pound you right back.

Connor Kilpatrick – Yuri
After we got back from Thanksgiving, management fired three adjustors and hired Yuri to replace them all.

Stephen Millhauser – The Tower
During the course of many generations the Tower grew higher and higher until one day it pierced the floor of heaven.

Emily Anderson – Love, The Frontier
Love, I am coming out to you in my wagon.

Joyce Carol Oates – Magda Maria
Magda Maria, she was known to us in the early 1970s on River Street, in south Sparta.

David Hollander – The Naming of the Islands
Now in our fourth year of exile, a crew of rogues and reprobates aboard the battered carrack Scapegrace, we run our weary figure 8s, slicing through black water and sea foam, searching for a country of our own.

Alexander MacBride – The Ape Man
T_______’s foster mother—do you know this story? His foster mother (an ape, of course) had just lost her baby—lost it in the sense that it had died, because she was actually still carrying the little body around—it had lost its grip on her fur when she was running away from something, the bull ape, I think, and fallen down out of the trees, dozens of feet.

Kenneth Bonert – Peacekeepers, 1995
In the morning they flew in on a Hercules and landed in Zagreb.

Terry Wright – The Butcher, The Baker
She had run the bakers out of their minds.