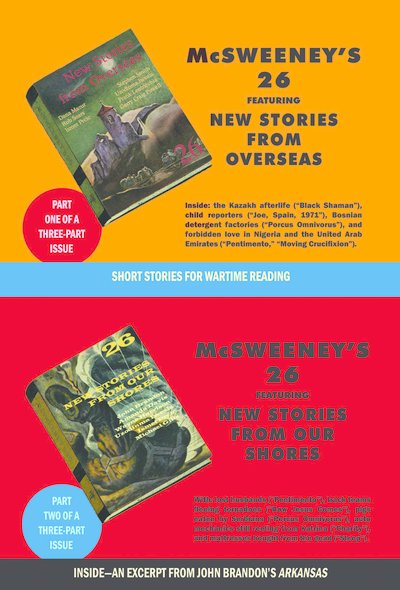 McSweeney’s 26 comes in three parts: two small, oblong books of stories by writers large and small (John Brandon, Amanda Davis, Uzodinma Iweala, and eight more), set in regions near and far (Kazakhstan, Bosnia, Spain, Arkansas), and a third book, Where to Invade Next, edited by Stephen Elliott and inspired by actual Pentagon documents, which seeks to give a picture of just how our government could create a rationale for its next round of wars. Read them one at a time, or all at once, but know that this one’s got it all—whirlwind visions of the world of today, and dead-serious essays about which parts of it the United States might soon be confronting.

Part One: New Stories from Overseas

Black Shaman by Dana Mazur
Vera worked as a cleaning lady in Moon Agate, the most expensive spa not only in Almaty but also in all of Kazakhstan.

Joe, Spain, 197 by Stephen Smith
My brother, Joe Blaze, was a bit of a boy travel writer.

Porcus Omnivorus (Part One) by Ismet Prcic
Mustafa’s grandfather was born in a shed.

Death and Burial Among My People by Rob Sears
It is incumbent among my people, such as Birian, Yvonne, and Tom and me and Ricky, that we leave a silence after someone has died.

The Italian Actress by Frank Letricchia
It was there, in Volterra, two years ago, that I found them: the fantastically named Sigismondo Malatesta and his companion of a thousand devious allures, who called herself Isotta degli Atti.

Moving Crucifixion by Garry Craig Powell
Every day, after a slow afternoon following the markets in his marble-floored office at the bank, Marwan had coffee in the Al-Quds Café and surfed the net for a soul mate.

An excerpt from Arkansas by John Brandon
When Kyle arrived at the lot, he saw a flatbed truck.

Sleep by Amanda Davis
I bought my bed from a dead girl.

How Jesus Comes by Michael Gills
Oh God, if there’s a Jesus, let him come like the class-five honeybabe that fell on us that spring day, 1076, when Coach had us sprinting 220s around the cinder track, when Aerosmith’s “Walk This Way” played out the T-tops of all the jet-black Camaros as Lowman’s Hardware and Grocery got hit, as did Templeton’s IGA and Fred Woodhead’s Feed & Seed and the slaughterhouse on the railroad track, where all the white bulls got loose and Deputy Biggs Self chased them down Main Street with the sirens blaring, fire belching out his silver plated .45.

Porcus Omnivorus (Part Two) by Ismet Prcic
You know you’re dreaming because you’ve never seen this sneaker moving like this before.

Part Three: Where to Invade Next by Stephen Elliott