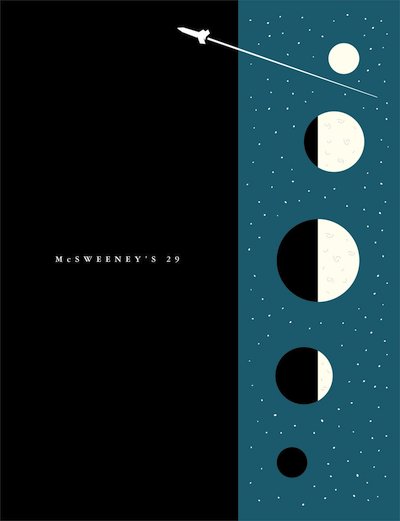 With our biggest line-up in quite a while—fifteen stories from writers like Yannick Murphy, Roddy Doyle, Ben Greenman, and Peter Orner—McSweeney’s 29 offers everything a good book should: there is jungle warfare, there are boomerang factories, there are tragedies and romances and animals it might not have been wise to bring home. There is also art on every damn page, and a finely die-cut cover, wrapped in several kinds of cloth, that will make other people want to grab this one right out of your hands, so watch out.

Nice When Someone Is Excited to Hear from You by Brian Baise
I made a mistake a few years ago and took a job selling software on commission in Toledo, Ohio.

The Strauss House by Dawn Ryan
Barbara and Sam met their freshman year in high school running cross country on the JV team.

The Land of Our Enemies by Nathaniel Minton
Peterson did everything by the book.

Augury by J. Erin Sweeney
When I was young and traveled a great deal, I once passed through a foreign land with a lovely local custom.

Kosciuszko by Peter Orner
Barkus and I used to buy dope in Humboldt Park, beneath the giant equestrian statue of Thaddeus Kosciuszko.

Following a Lifetime of Fabrication. In the Wake of Decades at Sea. by John Thorson
After years of pretending to search for a creature I’d imagined, I accidentally discovered it.

A Record of Our Debts by Laura Hendrix
Selma’s on the woodpile now.

My Crush on Hilary Duff by Blaze Ginsberg
In 2002, Blaze Ginsberg was the subject of Raising Blaze, his mother’s account of her efforts to shepherd him through the public-school system.

The Govindan Ananthanarayanan Academy for Moral and Ethical Practice and the Treatment of Sadness Resulting from the Misapplication of the Above by Ben Greenman
The academy only lasted a decade, though the building that housed it, a former boomerang factory, still stands on the border between India and Australia.

Cadence by Erica Plouffe Lazure
Something ate a hole through the oil tank, so we called Joey in from the pumps to fix it.

Calls by Yannick Murphy
Call: A cow with her calf half born.

Labyrinth by Joyce Carol Oates
A childish and surely baseless fear of being buried alive was a lifelong obsession of young N.