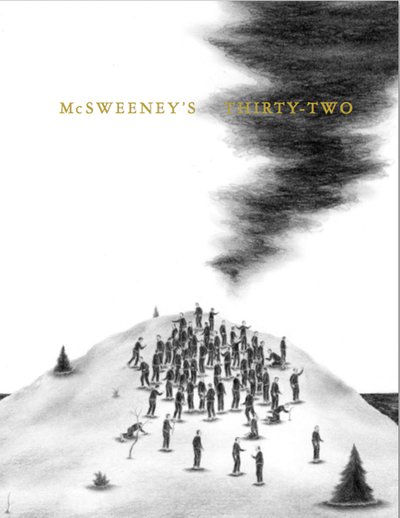 Because it seemed important to know in advance, we’ve dedicated Issue 32 to an investigation of the world to come—near-future stories written by the likes of Anthony Doerr, Heidi Julavits, Wells Tower, Chris Adrian, Sheila Heti, and Salvador Plascencia, each of ‘em unearthing a different corner of life in the year 2024. This will be, we are sure, way more entertaining than waiting fifteen years for the real thing.

Eighth Wonder by Chris Bachelder
When they came they destroyed.

The Black Square by Chris Adrian
Henry tried to pick out the other people on the ferry who were going to the island for the same reason he was. He wasn’t sure what to look for: black Bermuda shorts, an absence of baggage, too-thoughtful gazing at the horizon? Or just a terminal, hangdog look, a mask that revealed instead of hiding the gnarled little soul behind the face?

Oblast by J. Erin Sweeney
Baku, on the coast of the Caspian Sea. A pier between the cold, polluted deep and the early-morning light of an ancient, weary city undergoing a shift, an awakening of sorts, accompanied by a surge of interest in reality television, tiny dogs, and poetry.

There Is No Time in Waterloo Sheila Heti
Everyone in Waterloo was an amateur physicist, and they endlessly bugged the real physicists as the physicists sat in cafes talking to each other.

Material Proof of the Failure of Everything by Heidi Julavits
Nobody laughed as Gyula rotated through the revolving glass doors of the Muvész Kávéház, as he caught the belt loop of his overcoat on a protruding nail, as he made another two full turns before managing, gracelessly, to extract himself on the intended side of things.

The Netherlands Lives With Water by Jim Shepard
A long time ago a man had a dog that went down to the shoreline every day and howled. When she returned the man would look at her blankly. Eventually the dog got exasperated. “Hey,” the dog said. “There’s a shit-storm of biblical proportions headed your way.”

The Enduring Nature of the Bromidic by Salvador Plascencia
Endeared by its disrepair and moldings, they move into a house with delicate plumbing.

Sky City by Sesshu Foster
To advance the proletarian interests of the community and counteract the military-industrial propaganda of the oppressor government, which goes so far as to categorically deny the existence of the High Low Radiance Corridor, disregarding even the cars that disappeared many years ago and that abruptly reappear nowadays falling precipitously out of the sky to wreak havoc on community members, community gardens, and street traffic, pirate radio Ehekatl 99.9 on your dial broadcasts this report-during our irregular hours of 2 a.m. to 6 a.m. from various hilltops in northeast Los Angeles-to examine the Mysteries of East L.A., and to confirm the existence of one of the biggest: the long-rumored but never-before-sighted Sky City.