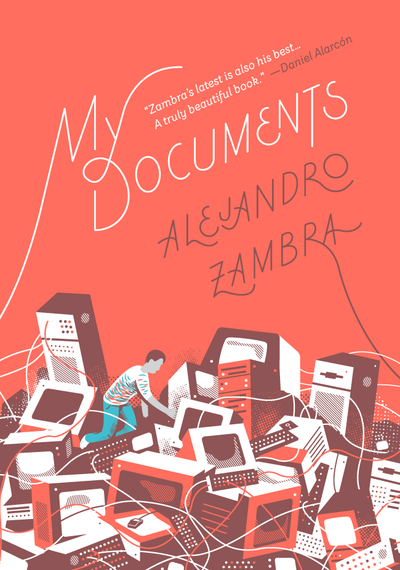 Named one of The Boston Globe, NPR’s, and Electric Literature’s Best Books of 2015!

Get this book and two others for a discount with the Rainy Day Essentials!

My Documents, from Alejandro Zambra, the award-winning Chilean writer whose first novel was heralded as the dawn of a new era in Chilean literature, is described by Junot Díaz as “a total knockout.” In his first short story collection, Zambra gives us eleven stories of liars and ghosts, armed bandits and young lovers—brilliant portraits of life in Chile before and after Pinochet. The cumulative effect is that of a novel—or of eleven brief novels, intimate and uncanny, archived until now in a desktop folder innocuously called “My Documents.” Zambra’s remarkable vision and erudition is on full display here; this book offers clear evidence of a sublimely talented writer working at the height of his powers.

Read “The Most Chilean Man,” one of the stories in My Documents, in its entirety on VICE.

Read the McSweeney’s Books Q&A with Alejandro Zambra about My Documents.

Praise for My Documents:

Included in The Millions’s Most Anticipated for 2015.

Included in BuzzFeed’s Most Exciting Books of 2015 from Independent Publishers.

A Publishers Weekly pick of the week.

“In his new book, Zambra returns to the twin sources of his talent—to his storytelling vitality, that living tree which blossoms often in these pages, and to his unsparing examination of recent Chilean history.”
—James Wood, The New Yorker

“This dynamite collection of stories has it all—Chile and Belgium, exile and homecomings, Pinochet and Simon and Garfunkel—but what I love most about the tales is their strangeness, their intelligence, and their splendid honesty.”
—Junot Díaz, The New Yorker

“To read Zambra and a collection like My Documents is to engage with someone who writes as though the burden of history was upon him and no one else — the history of his country of Chile, of literature and of humanity’s shared experience. Put simply, the novel is a force, and further proof that the author is in a class of his own.”
—Juan Vidal, NPR

“Zambra more than delivers with his latest. He’s a thoughtful craftsman, brick by brick laying the foundation for works that transcend continents and labels. Let us now forget the smallness of simply spearheading a new Latin American fiction. My Documents goes beyond that, burning brighter than most anything we’d call exceptional, yesterday or today and in any language.”
—NPR

“The stories gathered in My Documents might be pulled straight from Zambra’s computer files; despite their polish, they are pleasingly miscellaneous, unmediated… Zambra knows how to turn the familiar inside out, but he also knows how to wrap us up in it. These generous stories satisfy our demand for narrative even as they question it.”
—Natasha Wimmer, The New York Times

“Sentence-by-sentence pleasure… [Zambra’s] most substantial achievement yet.”
—The Seattle Times

“In this excellent collection, as in all his work, memory is put under a microscope, and the division between author and characters is never certain… Zambra’s stories are always—or always allege to be—acts of remembrance, and the care he takes to let his readers know that suggests something distinctive about his method.”
—The Guardian

“Much like Junot Díaz’s Drown, the stories in Chilean author Zambra’s collection are discrete tales that blend together with an impressive fluidity. Zambra’s characters, who have many of the same personal habits (smoking, listening to ’80s pop) and secret predilections (writing poetry, experimenting sexually), seem part of a big, fragmented novel. Through 11 stories, the author’s charming cast examines religion, soccer, relationships, and the lure of solitude—all from a distinctly Chilean perspective. But the view is also a youthful one, neatly capturing the puzzling process of trying to figure out who you really are. A–”
—Entertainment Weekly

“Zambra is a direct literary descendant of his older, late compatriot Bolaño. He serves us black, urgent humor with a quotidian casualness, a deceptive simplicity that has no room for the fantastical, the magical, or the exuberant New World celebrations of, say, Neruda or Walt Whitman. The single thread of belief for some of Zambra’s protagonists is literature itself and its ability, through plain, naked language, to present life as it is felt and lived… Zambra’s work possesses a historical sadness that has no time for the gloss of nostalgia. It’s a literature that believes in itself, even when it’s mired in despair.”
—Bookforum

“Zambra’s dazzlingly funny and playful collection of tales makes clear that to fully comprehend Chilean history one must entertain a sense of the surreal.”
—The Boston Globe’s Best Books of 2015

“[M]emorable and masterful”
—The Harvard Crimson

“Zambra finds beauty in the anguish, meaning in the mundane and an elemental spark of fire in even the flintiest parts of our human hearts.”
—The Denver Post

“Full of brilliance. This is a new Latin American literature.”
—Mona Simpson

“My Documents is an act of literary levitation—luminous, magical and profound, written with the mysterious quality of weightlessness.”
—Jess Walter

“Zambra is so alert to the intimate beauty and mystery of being alive that in his hands a raindrop would feel as wide as a world.”
—Anthony Marra

“My Documents represents a new form. When I think about Zambra, I feel happy for the future of fiction.”
—Adam Thirlwell

“Zambra is the author of small classics—short in length, but enormous in every other way. My Documents elevates him to an entirely new level.”
—Valeria Luiselli

“Zambra is one of my favorite living writers. He brings such clarity, exactitude, compassion, oddity, and inventiveness to his books that every new volume he publishes goes on my read-this-immediately list.”
—Kevin Brockmeier

“What distinguishes Alejandro from his contemporaries is the sweetness and intimacy of his writing, and his confidence in letting himself be as he is.”
—VICE

“Exceedingly well told… My Documents forces a reader to contemplate what makes a novel cohere, and where we draw the lines between autobiography and fiction, author and subject… translated expertly by Megan McDowell.”
—Barnes and Noble Review

“[Alejandro] Zambra continues to portray in his writing the depth of feeling that humans bring forth in each other… Zambra’s impeccable style and knowledge of humanity are central to these 11 stories.”
—Booklist

“Extraordinary … these pages are animated by candid, familiar voices in whose recollections we become gently imbricated.”
—Words Without Borders

“The work of an author capable of creating outstanding stories, some of which… could form part of any collection of the best writers in Spanish of the last few decades.
—Patricio Pron, ABC

“The first thing that should be said about My Documents is that it is one of those books that is difficult to categorize, but it is in this indefinable nature that its intrinsic value resides.”
—Iñaki Ezkerra, El Correo Español

Professors! This book has been assigned in the following courses:

To order a desk or review copy for your course, please contact us at custservice@mcsweeneys.net.