MY FAVORITE GIRLFRIEND WAS A FRENCH BULLDOG (E-BOOK) 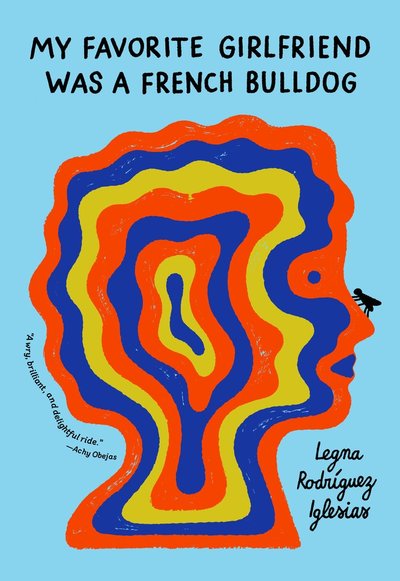 Looking for the physical book of My Favorite Girlfriend Was a French Bulldog? Click here.

My Favorite Girlfriend Was a French Bulldog is a novel told in fifteen stories, linked by the same protagonist, our narrator, who—in her own voice and channeling the voices of others—creates an unsparing, multigenerational portrait of her native Cuba. Though she feels suffocated by the island and decides to leave, hers is not just a political novel—nor just a queer novel, an immigrant novel, a feminist novel—but a deeply existential one, in which mortality, corporeality, bureaucracy, emotional and physical violence, and the American Dream define the long journey of our narrator and her beloved pet dog, who gives the book both its title and its unforgettable ending. In its daring style and structure—both playful and profound, youthful and mature—and its frank discussion of political and sexual identity, My Favorite Girlfriend Was a French Bulldog marks the emergence of an original and essential new voice.

One of Lit Hub’s “5 Books You May Have Missed in July.”

“A poet with an impeccable ear, an essayist with relentless curiosity, a fearless iconoclast, and a novelist who can weave into prose multiple voices—or one voice that channels them all in this novel—Rodríguez Iglesias paints a fresco of Cuba in which the discussion of political and sexual liberation reveals a suffocating reality that the narrator and her pet need to escape.”
—World Literature Today

“A boundary-breaking work… at once wild, compassionate, and challenging… precise and correct.”
—ZYZZYVA

“By turns elusive, baffling, heartrending, and charming, held together by a spirit of truth… a decidedly postmodern novel.”
—Sinister Wisdom magazine

“’There is only one way to know that you are alone, believing you are not,’ said a voice in My Favorite Girlfriend Was a French Bulldog. Thought-capsules such as this pop open when least expected in this intriguing collection of vignettes in which bodies and beings are bound to a collective claustrophobia that stretches from the small towns in Cuba to the big city of Miami. There is something rotting away here. It is pervasive, and it reeked. It reeks of the decay of humanity. And yet, as much as there is sullenness of expression throughout, so too are there flashes of tender joy and humorous affection, like the tossing of a flip flop into the air or the wagging of a dog’s tail. The book ends wagging its tail, and it made me wag mine.”
—Giannina Braschi, author of Yo-Yo Boing!

“Legna Rodríguez Iglesias is the most enchanting Cuban writer alive today and My Favorite Girlfriend Was a French Bulldog is a wry, brilliant, and delightful ride.”
—Achy Obejas, author of The Tower of Antilles

“There is a winning self-awareness to these stories that charms as much as it disorients. Funny, surprising, and disturbing—not so much by turns as in layers, all at once—the fifteen sections of Legna Rodríguez Iglesias’s strange and wonderful My Favorite Girlfriend Was a French Bulldog stand alone and also build on one another. I both admired and enjoyed this book, happy to get a little lost along its deceptively meandering paths, and happy to have this author snap me back to attention, over and over, and then startle and satisfy me with the ending. Even as she yanks you around, Rodríguez Iglesias knows precisely what she’s doing: she’ll rip your heart out—with a wink.”
—Hadley Moore, author of Not Dead Yet and Other Stories

“In My Favorite Girlfriend Was a Bulldog, Legna Rodríguez Iglesias reminds the reader that revolution lives in the world and in the self. Dog is a droll god in Cuba, one that takes the protagonist on wild adventures in these interconnected stories that slay me with their wry humor and potent storytelling.”
—Carmen Gimenez Smith, author of Milk and Filth