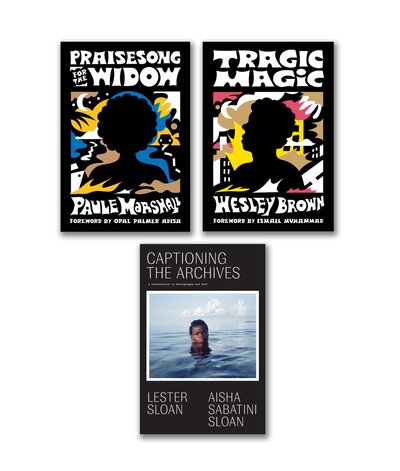 To celebrate McSweeney’s newest book series, we’re ecstatic to introduce the official Of the Diaspora Book Bundle. Of the Diaspora brings previously-published fiction, and other work overlooked at its original publication, from across the greater African diaspora to a contemporary audience in elegantly-designed hardcovers. Purchase today and we’ll send you the first two Diaspora titles immediately (followed by Captioning the Archives this fall) for one discounted price.

We’ve got our first three titles all ready to go, with future plans involving work centered around Afro-Caribbean and Afro-Brazilian voices. In the words of series-founder Erica Vital-Lazare, with Of the Diaspora “we hope to have gathered a cross-section of stories that take us back and slingshot us forward, so that we meet ourselves as mothers and fathers, lovers and leavers, historians and schemers, pilots and pirates, violinists and conduits of violence, astronomers and crash survivors eternally, and alternately, revisiting and loosing ourselves from the vast ship where so many of our bodies were held.” We hope you’ll join us.

Tragic Magic
by Wesley Brown
Your subscription starts with the February 2021 release of Wesley Brown’s Tragic Magic , a novel edited by Toni Morrison during her time at Random House and originally released in 1978 in the middle of a newspaper strike. Praised by James Baldwin and Donald Barthelme, Tragic Magic is the semi-autobiographical story of an African-American man who is incarcerated for being a conscientious objector during the Vietnam War. The protagonist’s experiences behind bars and on the Manhattan streets after his release are beautiful, startling, and timely.

Praisesong for the Widow
by Paule Marshall
Tragic Magic will be followed up in the spring by Paule Marshall’s Praisesong for the Widow, featuring a brand-new forward by Edwidge Danticat. This novel of a Harlem widow claiming new life was originally published in 1983, won the Before Columbus Foundation American Book Award, and was called “astonishingly moving” by Anne Tyler in a New York Times book review.

Captioning the Archives
text by Aisha Sabatini Sloan; photos by Lester Sloan
In this father-daughter collaboration, Lester (a staff photographer in Los Angeles for Newsweek for twenty-five years) opened his archive of street photography, portraits, and news photos, and Aisha (author of Dreaming of Ramadi in Detroit) interviewed him. The results are rich, probing, dialogue-based captions for more than one hundred photographs. Lester’s images encompass celebrity portraits, key news events like Pope John Paul’s visit to Mexico, Black cultural life in Europe, and, with astonishing emotion, the everyday lives of Black folk in Los Angeles and Detroit.