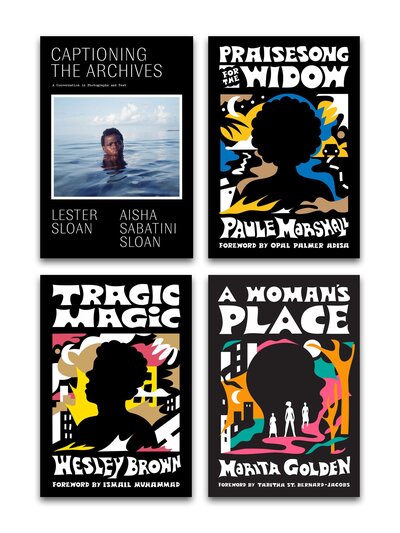 Get all four of our Of the Diaspora titles released to date for one bargain price with our Of the Diaspora Bundle. Of the Diaspora brings previously published fiction, and other work overlooked at its original publication, from across the greater African diaspora to a contemporary audience in elegantly designed hardcovers. These books’ themes, settings, characterizations, and conflicts evoke an experience, language, imagery, and power born of the Middle Passage and the particular aesthetic which connects African-derived peoples to a shared artistic and ancestral past.

In the words of series founder Erica Vital-Lazare, with Of the Diaspora “we hope to have gathered a cross-section of stories that take us back and slingshot us forward, so that we meet ourselves as mothers and fathers, lovers and leavers, historians and schemers, pilots and pirates, violinists and conduits of violence, astronomers and crash survivors eternally, and alternately, revisiting and loosing ourselves from the vast ship where so many of our bodies were held.” Bring home these brilliant and illuminating works today.

Tragic Magic
by Wesley Brown
Tragic Magic is the story of Melvin Ellington, a.k.a. Mouth, a Black twenty-something ex-college radical who has just been released from a five-year prison stretch after being a conscientious objector to the Vietnam War. Brown structures this first-person tale around Ellington’s first day on the outside. Although hungry for freedom and desperate for female companionship, Ellington is haunted by a past that drives him to make sense of those choices leading up to this day.

Praisesong for the Widow
by Paule Marshall
Avey Johnson—a Black middle-aged middle-class widow given to hats, gloves, and pearls—has long since put behind her the Harlem of her childhood. Then on a cruise to the Caribbean with two friends, inspired by a troubling dream, she senses her life beginning to unravel—and in a panic packs her bag in the middle of the night and abandons her friends at the next port of call. The unexpected and beautiful adventure that follows provides Avey with the links to the culture and history she has so long disavowed. Originally published in 1983, Praisesong for the Widow was a recipient of the Before Columbus Foundation American Book Award, and is presented here with a new foreword by Opal Palmer Adisa.

Captioning the Archives
text by Aisha Sabatini Sloan; photos by Lester Sloan
Lester Sloan began his photography career as a cameraman for the CBS affiliate in Detroit, then worked as a staff photographer in Los Angeles for Newsweek magazine for twenty-five years. His daughter, noted essayist and National Magazine Award-winning writer Aisha Sabatini Sloan, covers race and current events, often coupled with analysis of art, film, and pop culture.

A Woman’s Place
by Marita Golden
It is 1968 and everything about being a Black woman in America is changing. Three young women meet at a New England college and form a friendship that endures, heals, and dramatically shapes their lives. Faith, Crystal, and Serena each struggle to determine a path for themselves as they navigate expectations set by race, gender, and their families.

Published in 1986 after the award-winning autobiography Migrations of the Heart, A Woman’s Place was Marita Golden’s first novel. More than fourteen books in fiction and nonfiction, including Gumbo: An Anthology of African-American Writing, co-edited with E. Lynn Harris, followed. Golden went on to create and helm the Hurston/Wright Foundation, which has become a literary rite of passage for such talents as Nicole Dennis-Benn, Brit Bennett, and Tayari Jones. A Woman’s Place is reprinted here as an esteemed addition to McSweeney’s Of the Diaspora series, edited by Erica Vital-Lazare, and opens with a new introduction by the author, with a foreword by Women’s March co-founder Tabitha St. Bernard-Jacobs.