Edited and Compiled by Mateo Hoke and Cate Malek 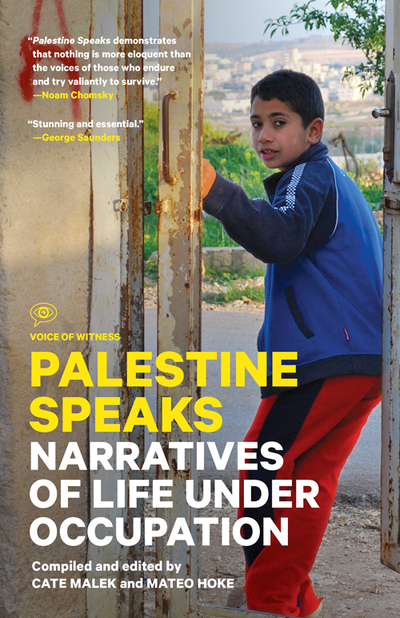 The occupation of the West Bank and Gaza has been one of the world’s most widely reported yet least understood human rights crises for over four decades. In this oral history collection, men and women from Palestine—including a fisherman, a settlement administrator, and a marathon runner—describe in their own words how their lives have been shaped by the historic crisis. Other narrators include:

ABEER, a young journalist from Gaza City who launched her career by covering bombing raids on the Gaza Strip.

IBTISAM, the director of a multi‑faith children’s center in the West Bank whose dream of starting a similar center in Gaza has so far been hindered by border closures.

GHASSAN, an Arab-Christian physics professor and activist from Bethlehem who co-founded the International Solidarity Movement.

Mateo Hoke is on tour! Click here for more info.

“An excellent introduction to a controversial subject. Hoke and Malek’s work should prove a sturdy and revelatory resource for those looking for a deeper understanding of an intractable conflict.”
—Publishers Weekly (Starred Review)

“A stunning, essential, and heartbreaking book that puts a profoundly human face on the suffering of the Palestinian people. This should be required reading for anyone with an interest in the Middle East, which is to say: everyone. Like all Voice of Witness books, Palestine Speaks, uses the grand old tools, presenting beautifully shaped narratives that evoke the reader’s empathy and help him see the connections between himself and the people narrating. The effect is magical and empowering–the reader feels a sense of connection and warmth, and is thus able to imagine positive outcomes. In other words, to read a Voice of Witness book is to feel one’s habitual sense of disconnection begin to fall away.” —George Saunders, author of The Tenth of December and MacArthur Genius Grant recipient

“Thirty years ago, Edward Said wrote of the systematic exclusion of Palestinian voices from American public discourse, of Palestinians being denied the ‘permission to narrate’ their own lives. Not nearly enough has changed, but Palestine Speaks–a collection of testimonials from Palestinians narrating their own experiences, their own suffering, their own choices–defies that interdiction. This is a rare and courageous book.”
—Ben Ehrenreich, journalist and author of Ether and The Suitors

“Palestine Speaks demonstrates that nothing is more eloquent than the voices of those who endure and try valiantly to survive. Nothing is more important for us than to listen to them carefully, to grasp their suffering, to learn from their testimonies about them and about ourselves, and to use this understanding to bring their tragedy to an end.”
—Noam Chomsky, author and professor at MIT

- Educators: Voice of Witness creates Common Core-aligned curriculum and sample lesson plans. To download a free e-copy for Palestine Speaks click here.
COVID-19 Update: All orders are still being fulfilled as normal, with occasional slight delays. If this changes we will update here and alert all impacted customers. Stay safe, and thank you most sincerely for your support. —McSweeney’s
×