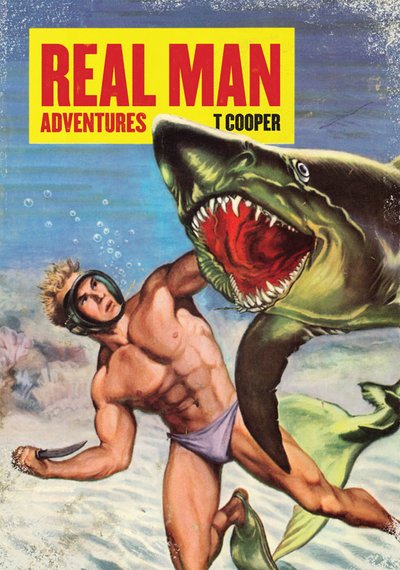 T Cooper’s Real Man Adventures is not a memoir. It’s an adventure story—and one packed with all the requisite dark alleys, disguises, leading ladies, and plot twists.

Cooper’s bold and bracing exploration of his transition to male unfurls in a series of inspired vignettes, intimate letters never sent, interviews, lists, and good old-fashioned stories that capture the range of the human experience. Real Man Adventures is a “sharp, hilarious, incredibly personal, and ingenuously honest look at what the hell it even means to be a man” (Interview magazine).

Read an excerpt from the book on our site! For the T Cooper Q&A, click here.

“In this mind-bendingly good book, T Cooper gets to the heart of what it is to be human by circling around questions most of us don’t ever know to ask. Subtle, engaging, righteously furious and often brilliant, this book radiates infinite possibility.”
—Nick Flynn

“[A} sharp, hilarious, incredibly personal, and ingenuously honest look at what the hell it even means to be a man.”
—Interview Magazine

“Sublime confidence and spirit distinguishes this unorthodox memoir of gender and identity.”
—Kirkus

“You’ve never read a book about this particular experience told in such a compelling voice.”
—Paul Constant, The Stranger

“This is a terrifically entertaining, often hilarious book.”
—Boston Globe

“A deeply personal, honest, and wildly creative expression of Cooper’s view of himself and of the world in which he lives.”
—Knox News

Cooper emphasizes the broader concept of humanity, which makes us more similar than different.”
—The Daily Californian

“Cooper’s is an absorbing adventure.”
—Time Out Chicago

“A valuable, enlightening document that sidesteps cliché and easy answers in favor of a bracing account of what it means—for Cooper—to be a man in this world.”
—The Portland Mercury

“At turns distancing and powerfully intimate, like a person consciously revealing himself.”
—SF Weekly

“T Cooper’s book is full of self consciousness, self examination, and expressions of emotion, and activism, and is inclusive of other voices in an apparently earnest effort at leveling hierarchies of I and Thou, Man and Woman, to networks of experience. It is from this position that Cooper reels to the pace of his journey, a sailor on the rungs of on an exploratory vessel. From here he chronicles both inner and outer journey, not only in his own sights from the crow’s nest but in the voices of those with experience—of age, of parenthood and generations, and of the second adolescence that is transition for the transgender man.”
—Justin Cascio, Good Men Project