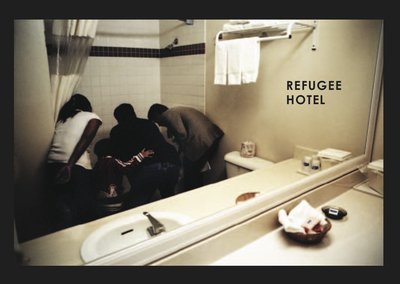 Refugee Hotel is a groundbreaking collection of photography and oral histories by Gabriele Stabile and Juliet Linderman that documents the experiences of refugees in the United States. Evocative images are coupled with moving testimonies from men and women who have resettled in the United States from Burundi, Iraq, Burma, Somalia, Bhutan, and Ethiopia. In their narratives, they describe their first days in the US, the lives they’ve left behind, and the communities they have since created. Woven together, these remarkable stories and images are a testament to the complexity and magnitude of the refugee experience.

PSAW WAH BAW, who was forced to flee her village in Burma amidst armed conflict. She describes how her family left their village with just five cups of rice, beginning an arduous journey toward resettlement that would take them through Bangkok, Tokyo, Illinois, and Texas.

PASTOR NOEL, who fled the civil war in Burundi in 1972 for a refugee camp in Congo. When war erupted in Congo in 1996, Noel was once again forced from his home. He now lives in Mobile, Alabama, and is a central figure in the African refugee community.

FELIX, a South Sudanese man who joined the rebel army as a teenager but eventually fled to a refugee camp in Kenya. Felix now lives in Erie, Pennsylvania, where he works with Habitat for Humanity to assist African refugees in purchasing their own homes.

Check out the the McSweeney’s Books Q&A with Gabriele Stabile and Juliet Linderman here.

“Photographer Stabile and journalist Linderman present the images and words of refugees to the U.S. in this compact, beautiful volume.”
—Publishers Weekly

”Refugee Hotel is full of stories that pull you in so immediately, and with such force, that the act of reading becomes surreal. Instead of sitting on the couch holding a book, it is as if you are in a movie theater, watching an independent film dominating awards season. It enriches your life in the moment, and leaves an impression so intimate you cannot easily forget it. There is no other book like Refugee Hotel on your shelf. You should remedy that soon.”—Alexis Coe, SF Weekly

“[Stabile]’s layered compositions (and reflections) often convey the refugees’ disorientation. In other photographs, isolated refugees seem to emerge from the shadows of their unfamiliar surroundings, physically and mentally displaced and lost in their own thoughts. The mix of emotions and sense of shock are almost palpable.” —Time Magazine’s LightBox

“The stories are raw and the images are complex. The authors avoid trying to portray an overall “refugee experience” shared by the approximately 64,000 displaced people who enter the U.S. and Canada each year. Instead, the book is a kaleidoscope of voices and imagery that celebrates the individuality of each new American.” —The Atlantic Monthly

”Refugee Hotel depicts acculturation with all its ironies.” —Mother Jones