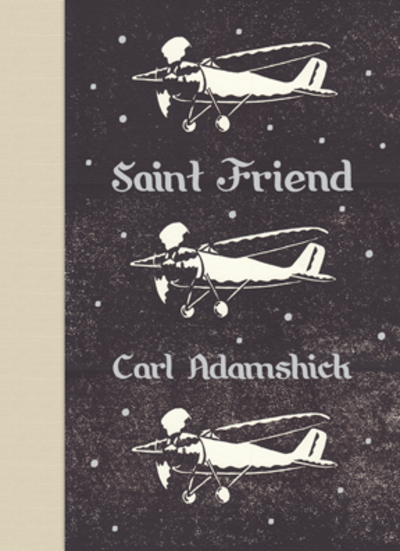 Saint Friend is that rare book that speaks in the voice of a generation. The voice comes from an acclaimed young poet who, after working years in obscurity, was fêted with the prestigious Walt Whitman Award for his first collection. This, his second book, is a freewheeling explosion of celebrations, elegies, narratives, psychologically raw persona pieces (one in the voice of Amelia Earhart), and a handful of punchy lyric poems with a desperate humor. It is, as the title suggests, a book exalting love among friends in our scattered times. Opening with a 5-page anthem called “Layover,” it begins:

They keep paging Kenneth Koch at the airport.
Someone should let the announcer know
he is dead, that there is no city he can go to,
that no one is expecting him. Once, I applied
to be a horse…

Check out the Willamette Week profile of Carl Adamshick

“The work of a seasoned poet”
—ZYZZYVA

”Saint Friend is a thin volume that is eminently generous in spirit—the size of a daybook, and just as reassuring an accompaniment.”
—Willamette Week

“There is so much empathy in Carl Adamshick’s Saint Friend…that it seems the lines are not enough to contain its self-aware effusiveness.”
—The Rumpus

“One of the finest qualities of Adamshick’s poetry—and his poetic personas—is a refusal to dodge the difficult pathos of existence.”
—MAKE

“[Saint Friend] is a quiet book that leaves a lot of space for the reader to enter and inhabit.”
—Oregon Humanities

“Reading these poems is like breathing fresh air. Carl Adamshick’s voice is instantly engaging. A sophisticated ear. A continuous feeling for measure. A clarity of complex feelings. The tactile and the mysterious. Emotion embedded rather than proclaimed. A subtle artistry. It is refreshing to read a poet who feels and thinks from inside sound and sense. ”
—Marvin Bell, Walt Whitman Award citation

“He is a poet rarely found these days. He comes not from the land of MFA and writing programs, but from the outsider country of a self-made artist.”
—Matthew Dickman

“Spare, image-driven, and constantly negotiating between the poles of celebration and lamentation; solitude and communal allegiance; and memory and oblivion, Curses and Wishes is a lyric exploration of the contradictions and the ephemeral connections that shape human experience. Often, it is a singular speaker’s prayer to a cruel and plural world and the insignificant significance of his own role in it … This final nakedness and vulnerability is what makes Curses and Wishes a truly exceptional debut collection by a poet who sings to us in a bruised, beautiful, utterly original language.”
—Kara Candito, Late Night Library

“There is a quiet power in these poems and this slim volume, which leave readers waiting to devour more from Adamshick … Another one for the Best of List of 2011.”
—Savvy Verse & Wit

“Adamshick’s way with a glancing aside can hit you like a truck. Life can do that, too, and these poems are wired deep into the velocity and weight of existence.”
—Patton Oswalt

“Carl Adamshick is weird. I mean, thank God. Weird and comic. After all, ‘Once, I applied/ to be a horse.’ But Adamshick’s arresting images and loonier tunes are like sparks given off by wheels that turn our mourning, our confusions, our tenderness—and so ultimately these are poems of great substance, powered by great love. ‘A red-barked tree applauds/ the day.’ Well, I applaud Saint Friend.”
—Albert Goldbarth

“I love the range of Carl Adamshick’s spirit—there’s rootedness and flux here, exuberance and a whispered entanglement with mystery. But it’s the sense of faith in these poems that I respond to most—faith in the bonds that can form between us. “Her heart could house a cathedral”—what a lovely idea, and what an expansive wish this poet makes for all of us – that we feel connected in the deepest way to what we wonder and believe.”
—Bob Hicok

”Saint Friend is a book of a rare order. At once astonished and pained, this collection gathers power because of its philosophical quietude. Wisdom rises up because Carl Adamshick begins each line with a reverence made sheer by what can and cannot be known. With narrative tracings devoid of narrative tyranny, the opening poem might be one of the finest long poems of our contemporary period. I say this because Adamshick’s poetic mastery seeks, at every turn, to be humane, to be pure in its sayings, its questions, its manifold varieties of honesty. To read Saint Friend in its abundant power, put your own life down and ‘Empty/ the world of everything/ except this.’”
—Katie Ford