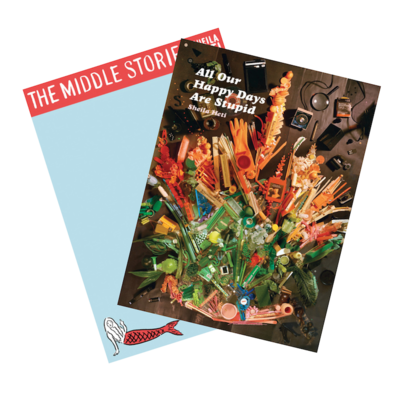 Sheila Heti fans, rejoice! Here you’ll find the bestselling author’s debuts in fiction and drama—The Middle Stories and All Our Happy Days Are Stupid—for one low, discounted rate. In tandem, these books present the skill and versatility of one of today’s most exciting writers.

Wildly acclaimed in Canada, this book marks the debut of a remarkable young writer first published by McSweeney’s when she was 23 and living at home with her dad and brother. The Middle Stories is a strikingly original collection of stories, fables, and short brutalities that are alternately heartwarming, cruel, and hilarious. This edition marks the 10th anniversary of The Middle Stories.

All Our Happy Days Are Stupid:

Two couples, each with a twelve-year-old child, travel to Paris; within a few moments of discovering each other in a crowd, one of their children disappears. A day later, one of the mothers disappears, too. The story that follows is a wonderfully strange, beautifully composed examination of happiness and desperation, complete with a man in a bear suit, a teen pop star, and eight really excellent songs.

Sheila Heti’s debut play was first commissioned in 2001, for a feminist theater company that never ended up staging it. Its turbulent creation became the backdrop of Heti’s last novel, How Should a Person Be?, which was named a Best Book of the Year by the New York Times and the New Yorker—and now the play itself can be revealed at last. With new introductions by Heti and director Jordan Tannahill, All Our Happy Days Are Stupid offers a novel’s worth of wisdom and humor, of wild hope and dreamlike confrontations, and page after page of unforgettable lines. Seen until now only by a lucky few, its publication is a cause for celebration.