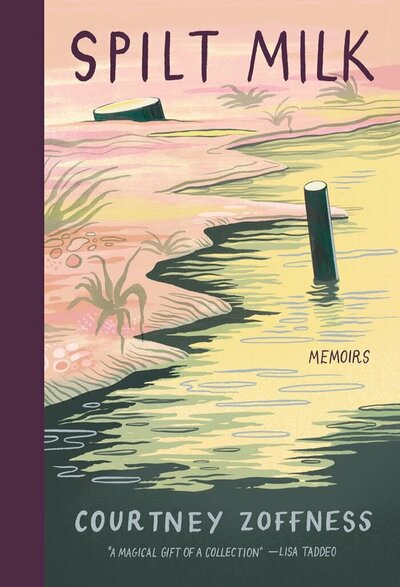 For a very limited time get a copy of Courtney Zoffness’s masterful collection of memoirs, Spilt Milk, signed!

“Spilt Milk explores the physicality of the body and how generational memory, anxiety, and disappointment entwine within us to conceive life. These are essays about pain. About belief. About desire … a window into the experience of how we both inherit and pass on different parts of ourselves.”
—Los Angeles Review of Books

“In her imaginative Spilt Milk, Courtney Zoffness strives toward empathy in a way that pushes against the cynicism we’re justified in feeling upon the trotting out of the concept.”
—Full Stop

“Moves back and forth through time with an elegant quickness that insightfully captures how the past shapes who we are and who we might become.”
—Booklist (starred review)

“In her layered storytelling, [Zoffness] brings empathy to every situation and often finds empathy for herself along the way. Spilt Milk is a generous, warm debut from an already prizewinning writer.”
—Book Page (starred review)

“Each essay is just as thoughtful and smart and well-told as the last one — don’t miss this.”
—Alma Magazine

“Lyrical and brilliant in the way a jewel reveals many facets at different angles.”
—Jewish Boston

“In this collection of essays, Courtney Zoffness tackles motherhood in a way that is simultaneously fresh and achingly relatable … Zoffness recreates tender, moving, and poetic moments that will etch their way into your brain and heart for a very long time. We should be so lucky to get more work from the young writer.”
—Apartment Therapy

“A powerful exploration of a range of experiences that many women face…full of acute observations.”
—Jewish Book Council

“I don’t know what I love the most about Courtney Zoffness’s Spilt Milk. The taut originality of the prose? The acuity of its insights? The daring vulnerability? There is so much I want to say about Spilt Milk, but honestly they’re all variations of: This is fucking brilliant. Whatever you think this book is, it’s more. A debut writer this talented and skilled is an event in itself.”
—Mat Johnson, author of Pym

“Gentle, playful and laced with subtle wit, these essays are a welcome balm in an insane and un-gentle time.”
—Mary Gaitskill, author of This is Pleasure and Bad Behavior

“Spilt Milk contains the wisdom of a mother, the maturity of an older sister, and the wide-eyed wonder of a small child. It’s a magical gift of a collection.”
—Lisa Taddeo, author of Three Women

“In these ten musical, open-hearted essays, Courtney Zoffness establishes herself as one of our most soulful, clear-eyed narrators. A lucid dream of a book I wished would never end.”
—Elisa Albert, author of After Birth

“Wry and masterful—Spilt Milk examines the multiplicities of self and culture, asking the tough questions with remarkable concision. Courtney Zoffness is a writer of supernatural acuity and wit.”
—T Kira Madden, author of Long Live the Tribe of Fatherless Girls

“Perhaps you have heard that being a mother of small children is hard, especially so right now, and finally, here is a book of essays that doesn’t cover up the messiness, the oddness, the love and the sadness and the worry all at once. Unsanitized and beautiful.”
—Emma Straub, author of All Adults Here and owner of Books Are Magic

“Courtney Zoffness’s collection is written with a fierce and sometimes funny honesty. Zoffness explores motherhood and daughterhood, and how these early attachments make us and unmake us, how they connect us to others—until they are us.”
—Tiphanie Yanique, author of Land of Love and Drowning

“These bright, knowing essays spill over with intelligence and wit. Courtney Zoffness traces the dizzying conflict faced by parents—the daily ricochet between burden and joy—and, with a sharply lyric voice, discovers hidden connections between this domestic struggle and the larger cultural and political winds shifting around us.”
—Ben Marcus, author of Notes from the Fog

“On one level, Spilt Milk is an extraordinary exploration of the connections, small and large; real and imagined, between childhood and parenthood. On another level, it’s irrefutable proof that Courtney Zoffness is a wondrous calculus of a prose writer: keen, inventive, candid, open-hearted, not to mention one helluva stylist.”
—Mitchell S. Jackson, author of Survival Math