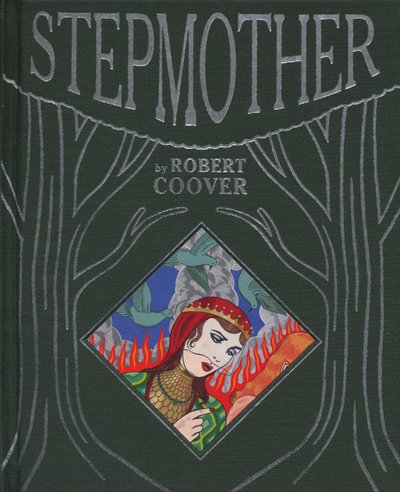 Robert Coover, a father of modern American experimental fiction, returns with Stepmother, a masterful reimagining of the fairy-tale tradition. There is magic, there are princes, there are painful castrations. There is also beauty, and true love, of a sort. Illustrated by Michael Kupperman, bound in soft cloth, stamped with precious metals.

"Mr. Coover's work has long occupied a place of honor. He goes at his task with an almost alarming linguistic energy, a Burgessy splatter of vocabulary, and a ferocious love of everything comic and grotesque."
—Salman Rushdie

"Robert Coover is a colossal subversive. At seventy-two, Coover is still a brilliant mythmaker, a potty-mouthed Svengali, and an evil technician of metaphors. He is among our languages most important inventors, and it is more crucial than ever to read him."
—Ben Marcus

"Of all the post-modernist writers, Robert Coover is probably the funniest and most malicious, mixing up broad social and political satire with vaudeville turns, lewd pratfalls and clever word plays that make us rethink both the mechanics of the world and our relationship to it."
—Michiko Kakutani, The New York Times

"Robert Coover was my teacher when I was young and impressionable, which was long ago. He put my head in a vice, and crushed it, picked out the bits that were worth saving, of which there were not many, and made me the writer that I am. Rarely has mordant wit and loathing for the corridors of power been yoked so effectively to a wild love of language and a democratic urge to entertain. He was my teacher then, and he is still my teacher by his fine example. I always read his new work with a sense of excitment."
—Rick Moody