THANKS AND HAVE FUN RUNNING THE COUNTRY: KIDS’ LETTERS TO PRESIDENT OBAMA 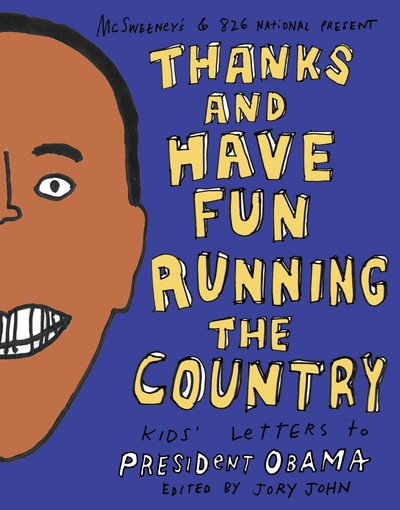 A few days after the election of Barack Obama, kids around the country were asked to provide advice and guidance to their new president. In this collection, arriving at inauguration time, there's loads of advice for the president, often hilarious, sometimes heartfelt and occasionally downright practical. Students from all over the country reach out to the 44th president, speaking to the issues closest to their hearts, relating their life stories, and asking for help. Topics include the economy, education, war, global warming, race relations in America and immigration. The book also includes letters about snow cones, puppies, microwavable burritos, dinosaur projects, multiplication and the ghost of Abraham Lincoln, reportedly haunting a White House bedroom.

Thanks and Have Fun Running the Country includes such advice as:

"If I were president, I would help all nations, even Hawaii."
—Chad Timsing, age 9, Los Angeles

"I really hope you put America back together. No pressure though."
—Sheenie Shannon Yip, age 13, Seattle

And, while it wasn't advice, exactly, we thought this was worth sharing:
"You are just like a big me."
—Avante Price, age 7, Seattle

Watch a video of 826 National kids read their advice to President Obama here.

Thanks and Have Fun Running the Country has been featured in People and USA Today.

Praise for Thanks and Have Fun Running the Country:

"[Thanks and Have Fun Running the Country]… offers a moving snapshot of children's lives in the waning days of 2008."
—USA Today

"A hilarious and touching collection of letters compiled at 826 Valencia in San Francisco and the writing center's half dozen chapters across the country."
—San Francisco Chronicle

“A collection of childhood wisdom that just might make a difference in the  difficult times ahead.”
—MSNBC/NBC Chicago

“Preternaturally sagacious youngsters from 826 National's various tutoring centers across the country chimed in to the national dialogue with their  advice, concerns and hopes for their new president.”
—LA Times

“With John as editor, Thanks and Have Fun Running the Country: A Collection of Kids’ Letters to President Obama has become a much-talked about project that, at its core, is really a child’s perspective on the notions of hope, ideals and challenges facing the 44th president of the United States.”
—Tahoe Daily Tribune

There are just over two weeks left in the election and we want to help you get ready. Subscribe to our multi-award winning quarterly by this Tuesday and we’ll send you both parts of our Small Blows Against Encroaching Totalitarianism series for free!
*Dates based on Pacific Time, offer void if other discounts applied*