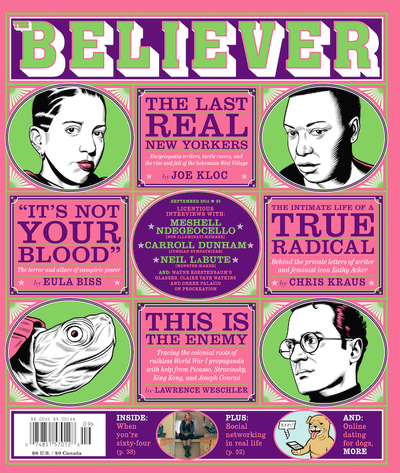 Discuss Rules Beforehand by Chris Kraus
Navigating the professional and personal lives of writer Kathy Acker through her work and her emails with media theorist McKenzie Wark.

The Color and the Pageantry of Thoroughbred Turtle Racing by Joe Kloc
A handful of remaining Greenwich Village bohemians wonder what ever happened to the revolution.

Vampires and Vaccines by Eula Biss

“The Relic”: a new poem by Yusef Komunyakaa

Neil LaBute interviewed by Rider Strong
“I mean, were we aware that Nic Cage in a bear suit would be funny? Yeah. But we knew that we were still going to kill him in the end.”

Meshell Ndegeocello interviewed by Melissa Locker
“If you have a very good bottle of wine and a sunset, the person you’re with may wanna hear Joni Mitchell’s Blue, and things will happen.”

The Process by Elisa Albert
Tanja Hollander discusses her quest to meet and photograph every one of her Facebook friends, including those she doesn’t actually know.

My New Glasses by Wayne Koestenbaum