THE BEST OF McSWEENEY’S INTERNET TENDENCY 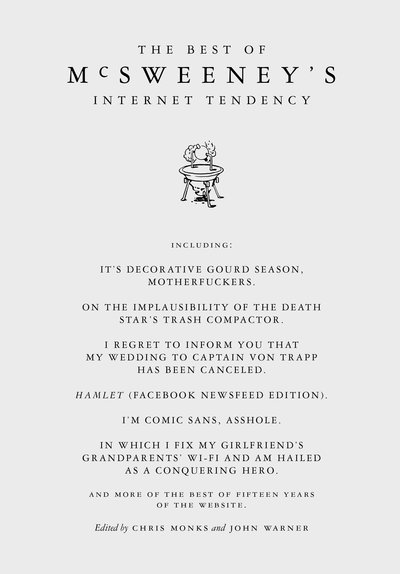 Back in 1998, the internet was young and wild and free. Along with listservs, pornography, and listservs dedicated to pornography, there was a website that ran all its articles in the same font and within abnormally narrow margins. This site was called McSweeney’s Internet Tendency, and many dozens of people read it. Now, fifteen years later, most of those readers have died, but the Tendency still exists, publishing, every day, quasi-humor writing in the same font within the same abnormally narrow margins. Every year or so, we collect some of the site’s better material and attempt to trick readers into paying for a curated, glued-together version of what is available online for free. This collection is the best and most brazen of such attempts. Please enjoy it, after you have paid for it.

ALSO: McSweeney’s and Vulture present Mike Lacher’s “In Which I Fix My Girlfriend’s Grandparents’ WiFi and Am Hailed As a Conquering Hero.”

“On the Implausibility of the Death Star’s Trash Compactor”

Praise for The Best of the Internet Tendency:

”[The Best of McSweeney’s Internet Tendency] is just like those chocolates that hotels put on pillows, if the chocolate were laced with acid.”
—Michael Agger, The New Yorker

“McSweeney’s has a high level of quality on its site, so it’s no surprise that the cream of its crop is out to do more than make readers laugh. ”
—A.V. Club

​”​The Best of McSweeney’s Internet Tendency is a great collection behind a tastefully designed cover that will compliment just about any coffee table or toilet-side book collection both in form and content.”
—Nerdist

”The Best of McSweeney’s Internet Tendency … is a riotous masterpiece.”
—PopMatters