THE FUTURE DICTIONARY OF AMERICA 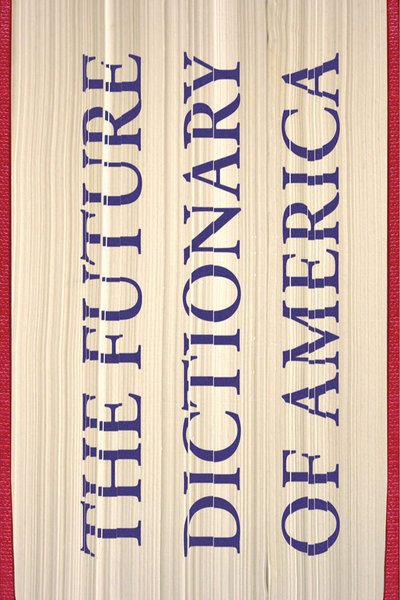 The book also comes with a bonus CD, the Future Soundtrack of America, featuring rare songs from R.E.M., Tom Waits, David Byrne, Death Cab for Cutie, Elliott Smith, and many others.

blowkay [bloh'-kay] adj. of an attitude, typically exhibited by the electorate, that elected officials who have sexual relations outside of marriage while in office are less deserving of impeachment than officials whose decisions lead to the loss of human life. Folks say the new senator from Rhode Island is a skirt chaser, but as long as he doesn't send thousands of Americans off to die in a war on false pretenses he's blowkay with me.
—Ryan Boudinot

Zzzunday [zuhn'-day] n.national holiday occurring once every 28 years, when a Leap Year coincides with a Sunday. Zzzunday is celebrated with 24 hours of uninterrupted sleep, in recognition of an entire generation accumulated sleep deficit. Secondary holidays have grown to immediately precede Zzzunday, including Sleepless Friday, and a Hibernation Saturday of block parties, children sleepovers, and retail promotional sales of bed linens, mattresses, and pillows. Traditionally, insomniacs mark Zzzunday by going out to a Chinese restaurant if they can find one open that day.
—Paul Collins