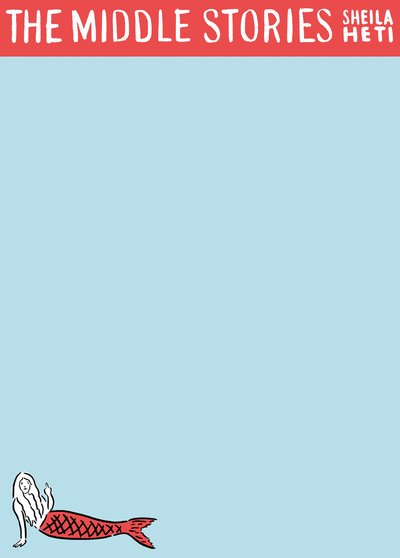 Get The Middle Stories and All Our Happy Days Are Stupid for a discount with the Sheila Heti Bundle.

Wildly acclaimed in Canada, this book marks the debut of a remarkable young writer first published by McSweeney’s when she was 23 and living at home with her dad and brother. The Middle Stories is a strikingly original collection of stories, fables, and short brutalities that are alternately heartwarming, cruel, and hilarious. This edition marks the 10th anniversary of The Middle Stories.

“Do you remember 2002?” Read this retrospective interview with Sheila Heti on The Middle Stories, ten years later.

Check out what The New Yorker’s Book Bench is saying! And read her interview on HTML Giant.

“Her prose is brilliantly crafted and everything about her stories is surprising and yet rings true.”
—Hour

“Heti writes with an ethereal clarity, the kind of fantastic matter-of-factness that characterizes dreams, myths, fables and nightmares. She uses her tone to lift tales of daily life to the level of myth, or to normalize the fantastic.”
—The Vancouver Sun

Praise for The Middle Stories:

“Heti’s overall sensibility is reminiscent of a remark Brassai once made about his photographs: ‘I never sought to express anything but reality itself, than which there is nothing more surreal.’”
—Eva Tihanyi, Toronto Star

“It’s hard not to look for a key or a moral in the stories collected in Sheila Heti’s widely-praised first book, The Middle Stories. A little dumpling falls from the pot to the kitchen floor below. A plumber woos a princess, taking advice from a frog. A small girl is very unkind to a mermaid in a jar that she found at a flea market—there’s just got to be a lesson in that…”
—Harry Vandervlist, FFWD

“This keen sense of the arbitrary extends to Heti’s approach to the implied social structure typically contained by the world of fable. For example, Heti employs a repeating female character—obsessed with beauty and her superficial power over men—who’d be the princess in a fairy tale. In Heti’s fictional world, she’s a typical, self-obsessed urbanite who has been granted an arbitrary position of authority by society.”
—Kevin Connolly, Eye Weekly

”The Middle Stories heralds in a New Nihilism, a smack in the face of conservative fiction.”
—Steven Naylor, Literary Review of Canada

“They are the sort of stories you would read to children before tucking them into bed for the night, if you wanted them to wrestle with existential angst before falling asleep.”
—Alan Reed, See Magazine