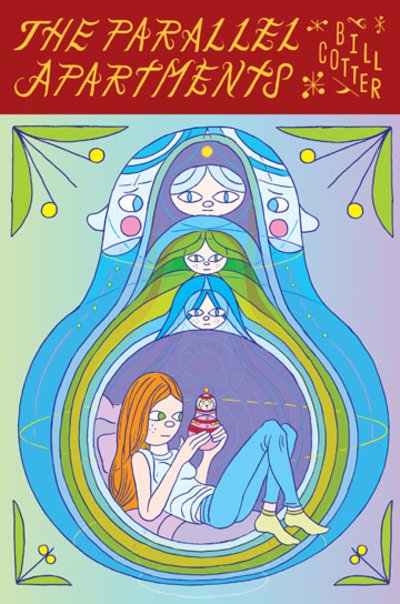 Justine Moppett is 34, pregnant, and fleeing an abusive relationship in New York to dig up an even more traumatic childhood in Austin. Waiting for her there is a cast of more than a dozen misfits—a hemophobic aspiring serial killer, a deranged soprano opera singer, a debt-addicted entrepreneur-cum-madam, a matchmaking hermaphrodite—each hurtling toward their own calamities, and, ultimately, toward each other.

A Texan Gabriel García Márquez who writes tragicomic twists reminiscent of John Kennedy Toole, Bill Cotter produces some of the most visceral, absurd, and downright hilarious sentences to be found in fiction today. The Parallel Apartments is a bold leap forward for a writer whose protean talents, whose sheer exuberance for language and what a novel can do, marks him as one of the most exciting stylists in America.

To read an excerpt of The Parallel Apartments, click here.

Listen to an interview with Bill Cotter on the Other People podcast.

Praise for The Parallel Apartments:

“Reading Bill Cotter’s The Parallel Apartments is like taking some kind of word drug, but a new one, synthesized in a desert lab from molecules of Lipsyte, Dickens, Pynchon, Williams, Chabon, DeWitt, and Joyce, and then spun together with Cotter’s own unique particles to yield a book that produces an actual high when read. There’s micro-attention paid to sweatpants material and the feel of artificial cheese powder on fingertips and the bouillon smell of nether regions. There is sadness. There is loneliness. There are riffs that make me wish an actor were there to read to me aloud, so I could cry from laughter without needing to clearly see the page. This book is an experience—it is a never-read-anything-like-it-before work of brainy, heartfelt joy.”
—Heidi Julavits, author of The Vanishers and The Effect of Living Backwards

“Bill Cotter writes with so much dark wit, such a keen eye for unsettling detail, such a perfect ear for the ways in which his bruised yet hopeful characters think and speak, that the sheer force of his fictional mind took me by surprise. The Parallel Apartments is an amazing read.”
—Tom Barbash, author of Stay Up With Me

“Four generations of Austin women—or five or three, depending on how you count—rivet our attention in this ribald and absolutely compelling novel. Both playfully absurd and absurdly playful, The Parallel Apartments is full of fresh language, exact observation, and—best of all—an underlying and genuine tenderness.”
—Scott Hutchins, author of A Working Theory of Love

“Funny and profane and more than slightly unhinged.”
—Texas Monthly

“Inventive and hilarious, The Parallel Apartments delights in the oddities of people and language. Inhabiting a mesmerizing and unnerving kaleidoscope world, Bill Cotter’s vivid characters turn “extreme” into the new normal. ”
—Full Stop

“Cotter manages to be surreal, gruesome, and snortingly funny. Do yourself a favor and give in to The Parallel Apartments’ gravitational pull.”
–Entertainment Weekly

“By the time you’re finished with The Parallel Apartments … you’re going to want the author to accompany you everywhere for the rest of your life.”
—The Austin Chronicle

”The Parallel Apartments is difficult to define. One part kooky comedy, one part family drama, one part exploration of womanhood, and one part gruesome catalogue of emotional dysfunction, Cotter’s second novel defies any particular genre, except, perhaps, Cotter’s own.”
—The T​exas Observer

“Bill Cotter’s darkly comic stories are powered by his delightfully strange and sometimes disturbing imagination, his empathetic character, and his graceful way with words.”
—The Rumpus

​”​Trying to describe The Parallel Apartments is like trying to pat your head while rubbing your stomach while reciting the alphabet backwards. ​”​
—​The ​Texas Observer​

“Cotter has mastered, from the lowest to highest orders, the elements of fiction; his sentences are as grand as the sweeping architectural details of his book’s structure.”
––Rain Taxi