THIS BRIDGE WILL NOT BE GRAY 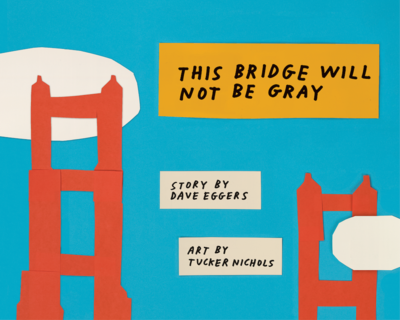 Get this book and Awake Beautiful Child together for a discounted price with The New Picture Book Bundle.

Or, for Dave fanboys and girls, get it bundled with his latest Some Recollections of a Busy Life with the New Dave Eggers Bundle.

A Publishers Weekly Best Book of 2015!

The Golden Gate Bridge is the most famous bridge in the world. It is also, not entirely coincidentally, the world’s only bright-orange bridge. But it wasn’t supposed to be that way.

Told with playful paper cut-outs and irresistible prose, This Bridge Will Not Be Gray is a joyful history lesson in picture-book form—a gorgeously crafted story that teaches us how beauty and inspiration tend to come from the most unexpected places. Sometimes you have to fight for what you believe in, even if it’s just a color.

To read the Marin Independent Journal’s article on This Bridge Will Not Be Gray click here !

If you like This Bridge Will Not Be Gray, don’t miss Crabtree by Jon and Tucker Nichols!

Peek behind the scenes with the illustrator, Tucker Nichols!

Listen to Tucker Nichols talk about the book on 89.3 KPCC’s Take Two,

Check out this blog post about the book on kottke.org.

Praise for This Bridge Will Not Be Gray:

“An iconic bridge in a city known for its eccentricity deserves a biography to match, and the Golden Gate Bridge gets one here. The easygoing cadence and restrained humor of Eggers’s storytelling are instantly engrossing, and Nichols’s bold paper-cut artwork makes as strong an impact as the bridge’s emblematic hue.”
—Publishers Weekly’s Best Books of 2015 List

“[T]his is a children’s book, but one need not be a child to warm to its celebration of a span that is ‘bold and courageous and unusual and even strange’… [Nichols] breathes life into the bridge’s origins with colorful cut-paper art.””
— John McMurtrie, SF Gate

“Occasionally a book — think Donald Crews’s classic ‘Freight Train’ — delivers mechanical accuracy along with poetic precision. ‘This Bridge Will Not Be Gray’ is one of those rare fusions. It’s a story about the history of the Golden Gate Bridge that is a graphic looker… As you might hope for a book whose climax rests on the revelation of a color, the illustrations deliver in a big way.”
—The Boston Globe

“Dave Eggers brings charm and a subtle wryness to this true story of the building of San Francisco’s Golden Gate Bridge, with amazing details brought to life by Tucker Nichols’ papercut illustrations, that will keep even adults interested. Don’t be surprised if your kid ends up quoting facts about it at the dinner table for the next month”
—Cool Mom Picks

“Eggers’s lyrical prose and Nichols’s whimsical cut-paper illustrations tell the fascinating true story of how the Golden Gate Bridge came to be, and their glorious collaboration is an ode to creativity, a song in praise of inspiration over mediocrity.”
— The Buffalo News

“Eggers’s featherlight humor provides laughs throughout… Nichols’s construction-paper cutouts and hand-lettering provide a series of puckish visual counterpoints for the story’s two important messages: that situations and objects that appear unchangeable do, in fact, come from somewhere, and that adults can squabble even more foolishly than children.”
—Publishers Weekly (starred)

“Eggers’ text is sprightly and tongue in-cheek… Nichols brings a similar sensibility to his whimsical paper cutout pictures, while his dust jacket is something of a tour de force, unfolding to offer a poster-size picture of the beloved bridge, a span that continues to dazzle. Happily, Eggers and Nichols’ colorful work dazzles, too.”
— Booklist (starred review)

“[A]n inspiring testament to making bold choices–orange!–and having the courage of one’s convictions. (Bonus: The book jacket folds into a poster.)”
—Karin Snelson, children’s and YA editor, Shelf Awareness

“[Dave Eggers] has released a beautiful picture book about the history of his city’s iconic and famously colored bridge … Tucker Nicholls illustrated the book with paper cutouts, an inventive approach that is both whimsical and artistic mastery. The book is as lovely as it is architecturally informative, combining narrative, historical relevance and engaging texture.”
—Winston-Salem Journal

“At 110 pages, the book about the bridge expanded beyond expectation, but the length is merited, with a story compelling enough to keep adults interested as they read it (and re-read it and re-read it) each night at bedtime.”
—FastCo.Design

”This Bridge Will Not be Gray is filled with fun illustrations and Egger’s witty prose, compelling for any kid or adult on your holiday gift list.”
—7x7