THROWING STONES AT THE MOON: NARRATIVES FROM COLOMBIANS DISPLACED BY VIOLENCE 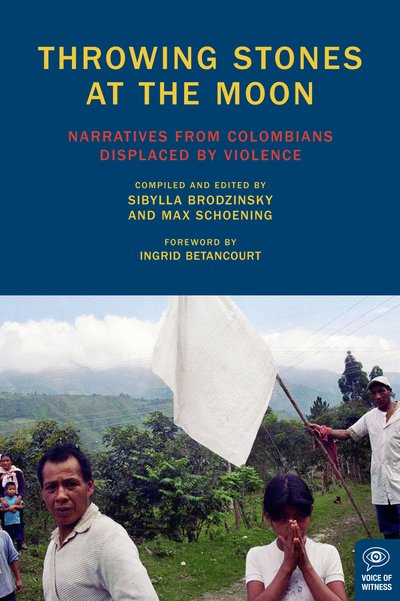 For nearly five decades, Colombia has been embroiled in internal armed conflict among guerrilla groups, paramilitary militias, and the country’s own armed forces. Civilians in Colombia face a range of abuses from all sides, including killings, disappearances and rape—and more than four million have been forced to flee their homes. The oral histories in Throwing Stones at the Moon describe the most widespread consequence of Colombia’s human rights crisis: forced displacement. Narrators recount life before displacement, the reasons for their flight, and their struggle to rebuild their lives.

This project, and the work of Voice of Witness, is supported in part by an award from the National Endowment for the Arts.

“Here are the real and unforgettable voices of Colombia’s long nightmare. They tell us of normal lives shattered by trauma, suffering, violence, and redeemed by love, resilience, courage or hard-earned wisdom. I read these oral tales with a knot in my stomach, frightened and moved, and finally amazed by this lesson: when people find the strength to tell us what has happened to them, no matter how horrendous, a terrible yet universal beauty somehow emerges, always casting light on the mystery of being human.”
—Francisco Goldman, author of Say Her Name

“The truth about the endless violence that has driven four million Colombians from their homes is, beyond doubt, one of the greatest untold stories of our generation. We are indebted to the editors of Throwing Stones at the Moon: Narratives from Colombians Displaced by Violence for recording the courageous stories of survivors across this beautiful and deeply troubled country. May their invaluable testimonies get the attention they deserve, and thus break the silence.”
—Jan Egeland, Former UN Under Secretary General and Envoy to Colombia

“Outside the U.S. media’s lights and whir, the largest crisis in the world of forced displacement from home is taking place in Colombia. Throwing Stones at the Moon makes it personal through these narratives of loved and difficult life, vivid and specific to Colombia’s places and to the families torn and struggling amid the long war. Brodzinsky and Schoening convey these people’s tender and bitter stories, of resilience and loss, of cruelty and solidarity, in their own full voices. Stories that don’t end with an act of violence, but that call out for compassion, and for justice.”
—John Lindsay-Poland, Director for Latin America and the Caribbean of the Fellowship for Reconciliation

“The soon-to-be-released book, Throwing Stones At The Moon (Voice of Witness, 2012) reads like a collection of literary short stories, but, in this case, the stories are both real and horrifying. The stories of those gathered in Moon are told by the Colombian victims of human rights abuses themselves…Given that these voices are rarely heard, this book is invaluable.”
—Huffington Post