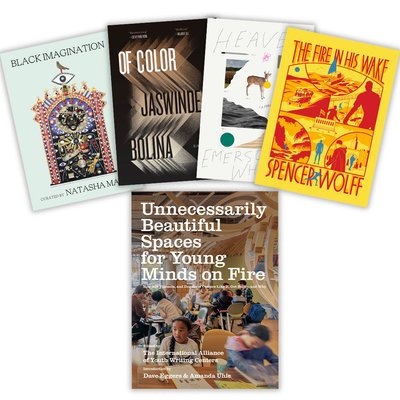 This may be hard to believe, but the year 2020 is already/finally halfway through. Here at McSweeney’s we’re peeking our heads up from our social-distanced bunkers, amid the daily barrage of news, to offer up a brand new bundle in commemoration of the occasion.

Included here are five books for the price of four, celebrating one of our most exciting years of publishing yet and possibly the longest half year in human history. From a deluxe full-color art book and epic migration novel, to a mind and genre-bending trans memoir and two slim, powerful, and distinct meditations on race, the books here have something for absolutely everyone.

In such an unique, difficult, nonstop history-making year, we want to make sure these books and authors all get the attention they deserve, and that these books find their way to the readers who would love them most. We could all use a break after making it this far, so take a moment and catch up with some of our favorite work we’ve ever published.

An expansive examination of what makes us up, Heaven wonders what role our childhood plays in who we are. Can we escape the discussion of causality? Is the story of our body just ours? With extraordinary emotional force, Whitney sways between theory and memory in order to explore these brazen questions and write this unforgettable book.

“Melodic and engagingly written, Heaven will enrapture anyone who loves reading for beauty and intellectual challenge at once.”
—Literary Hub

Every kid in the world needs a safe, welcoming, and even weird place to write. That’s the theory behind 826 Valencia, a writing and tutoring center started in 2002. That center, with a pirate-themed storefront, inspired similar centers around the world, from New York to Melbourne.

Across 280 pages and hundreds of beautiful full-color photos, this lavish, oversized book takes you behind the scenes of how these centers started, in the hopes of inspiring more communities, schools, and libraries around the world to build their own centers for young writers. Unnecessarily Beautiful Spaces for Young Minds on Fire is a joyous and wildly creative book, filled with stunning photos of the world’s most welcoming and wild spaces for young minds.

In his debut essay collection, award-winning poet Jaswinder Bolina meditates on “how race,” as he puts it, “becomes metaphysical”: the cumulative toll of the microaggressions and macro-pressures lurking in the academic market, on the literary circuit, in the dating pool, and on the sidewalks of any given U.S. city. Training a keenly thoughtful lens on questions that are never fully abstract―about immigration and assimilation and class, about the political utility of art, about what it means to belong to a language and a nation that brand you as other―Of Color is a bold, expansive, and finally optimistic diagnosis of present-day America.

The Fire in His Wake

In search of a better future, Arès embarks on an epic journey across northern Africa with Europe as his goal. He reaches Rabat, Morocco, where he joins a desperate community of exiles fighting for survival in a hostile land. While Arès risks everything to make it to Spain, Simon gradually awakens to a subterranean world of violence that threatens his comfortable expat life and fledgling romance with a Moroccan singer. Part colorful portrait of life in the Maghreb, part astonishing tale of hope and perseverance, The Fire in His Wake carries the reader from the inner sanctums of the UN to the hazardous realities faced by the refugees in the streets and on their risky crossings to Europe.