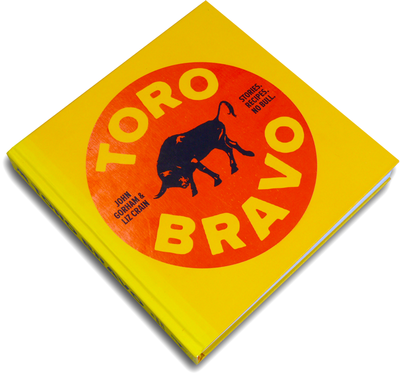 At the heart of Portland’s red-hot food scene is Toro Bravo, a Spanish-inspired restaurant whose small plates have attracted critical praise and a fiercely loyal fan base. But to call Toro Bravo a “Spanish restaurant” doesn’t begin to tell the whole story. At Toro Bravo, each dish reflects a time, a place, a moment. For chef John Gorham, it’s personal. Gorham’s the sort of guy who’d get his sous chef’s name tattooed on his backside; the sort of guy who’ll order rum shots for the table after you don’t believe you can ingest a single thing more. Most important, Gorham believes that there’s more to food than mere sustenance. The Toro Bravo cookbook tells that story: from Gorham’s birth to a fourteen-year-old mother who struggled—all her life—with drug addiction, to time spent in his grandfather’s crab-shack dance club, to formative visits to Spain, to becoming a father, to opening a restaurant. It’s about the power of passion, relentlessness, and, of course, food.

The Toro Bravo cookbook also includes 95 of the restaurant’s recipes, adapted for the home kitchen, from simple salads to homemade chorizo, along with an array of techniques that will appeal to both the home chef as well as the most seasoned, forearm-burned cook. You’ll want to cook these recipes. And you’ll want to share what you’ve made with the people who mean the most to you.

For your pleasure: An interview between John Gorham and Liz Crain on the Internet Tendency.

Take a gander at the book preview of Toro Bravo, which offers a delicious recipe to sample.

“These guys make Portland one of the most exciting restaurant cities in the world today.”
—Mario Batali

“Toro Bravo is so much more than a cookbook (though it does a damn fine job of being just that). It’s a passionate story of how one great chef found his way by following his heart and trusting his gut. It’s a practical guide and a culinary cri de coeur. This is the real deal. It’s the book I’m going to press into everyone’s hands. I love it like mad.”
—Cheryl Strayed, author of Wild

“John Gorham is a chef with a unique personality; he is magic. In his book Toro Bravo, he puts all his passion and soul into sharing Spanish cuisine with Americans. I’m certain both professional chefs and home cooks will love it.”
—Ferran Adrià, head chef at ElBulli

“You’re gonna love this cookbook. Toro Bravo brought something special to Portland when it opened, and still does: easy-to-love, Spanish-style food in a non-fussy atmosphere.”
—Stephen Malkmus

So many of my Portland friends have recommended that I eat at Toro Bravo, over the years, that I couldn’t ignore their suggestion. I’ve loved the restaurant’s many ferments, amazing food, and entire aesthetic. In the Toro Bravo cookbook, Chef John Gorham, collaborating with writer Liz Crain, has not only made the flavors of Toro Bravo accessible to home cooks with excellent, easy-to-follow recipes, but shared fascinating stories of his journey to the helm of some of Portland’s best restaurants. This book is filled with culinary inspiration.”
—Sandor Katz, author of Wild Fermentation and The Art of Fermentation

“An amazing story of a man’s life and the buillding of a great restaurant. I loved it.”
—Gus Van Sant

“Here in Portland, Toro Bravo carves an uncommon niche—simultaneously adventurous and comforting. This cookbook, like the restaurant itself, tells the story of one restless spirit’s search for home. These are recipes you’ll want to both cherish and share.”
—Carrie Brownstein, creator of Portlandia

“John Gorham seemingly mind-reads what we want to eat: comfort and craft popping with salty, sweet, spicy flavors. No one better translates Portland’s raging gustatory desires and DIY spirit. This book captures the joy of Toro Bravo; all heart, no bull.”
—Karen Brooks, author of The Mighty Gastropolis

“I’ve known John Gorham for over a decade, since I first got to town and he turned me down for a job. Since that fateful rainy morning, we’ve cooked together, confided in each other, commiserated (read: partied) together, and grown up significantly. Toro Bravo is the greatest expression of who John really is: nostalgic, spirited, brutally honest, fun as hell, and one of Portland’s all-around-greatest chefs. The Toro Bravo cookbook captures his vision, ferocity, determination, and hilarity.”
—Jason French, chef/owner of Ned Ludd

“John Gorhams’ cookbook is as outrageously delicious as his food, as lively as his restaurant (my second home in Portland), and as personable as he is. It is a shining testament to authentic cooking. Paying homage to the Spanish tradition and expressed in personal terms, John’s cooking is entirely unique.”
—Paul Bertolli

“The Toro Bravo cookbook is unique in its storytelling: John’s personal story, the stories of the restaurant’s evolution, the stories behind the recipes. Toro Bravo’s magic lies in its ability to seamlessly merge the art of cooking with the commerce of dining: these are small plates, with big ideas.”
—Andrew Zimmern, co-creator and host of Bizarre Foods

“Reads like a memoir on a motorcycle … with plenty of refreshment along the way.”
—Culinate