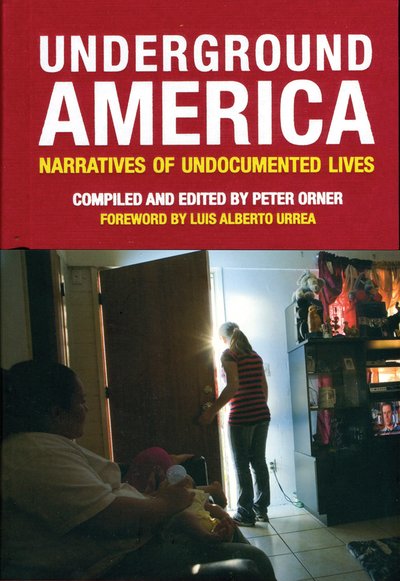 For the Spanish translation of this book, click here.

They arrive from around the world for countless reasons. Many come simply to make a living. Others are fleeing persecution in their native countries. Millions of immigrants risk deportation and imprisonment by living in the U.S. without legal status. They are living underground, with little protection from exploitation at the hands of human smugglers, employers, or law enforcement. Underground America, the third book in the Voice of Witness series, presents the remarkable oral histories of men and women struggling to carve a life for themselves in the U.S. Among them are:

FARID, an Iranian-American business owner who employs a number of American citizens while he himself remains undocumented. A critic of the Iranian government, he fears for his safety if he is deported back to his native country.

DIANA, who, along with thousands of other Latino workers, helped rebuild the Gulf Coast after Hurricane Katrina. After completing her job, she and many others were detained and imprisoned for not having proper documentation.

LISO, a South African woman who was the victim of a bait-and-switch immigration scam. She was enticed to come to the U.S. as a religious missionary, but once here, her sponsors forced her into unpaid domestic labor.

“Underground America, the engrossing new book in the Voice of Witness series from McSweeney’s oral histories of people who have had their human and civil rights violated makes one thing clear: The United States is, to the peril of its soul, doing a bad job of dealing with the 12 million to 15 million undocumented immigrants toiling in its fields and factories, farms and offices.” NPR’s Books We Like

“McSweeney’s Voices of Witness series continues (following Voices of the Storm and Surviving Justice) with this collection of oral histories from undocumented immigrants, aka “illegal aliens”: “We hear a lot about these people in the media, how they are responsible for crimes, take our jobs, and refuse to speak English. But how often do we hear from them?” Culled from new interviews, the book’s 24 subjects come from around the world (Mexico, China, South Africa, Colombia, Cameroon and others), each offering a vivid, personal, often wrenching and occasionally enraging first-person look into the immigrant experience, what editor and novelist Orner calls a “state of permanent anxiety.” Roberto, for instance, details narrow brushes with government agents as well as the everyday dangers inherent to unregulated work: “Nectarines are covered in this dust that makes your skin itch. You wear gloves when you’re picking them but, because of the sweat, your skin absorbs everything, right into the pores.” Diana, from Peru, worked on Hurricane Katrina cleanup and reconstruction crews while living 20 or more to a house: “I still have spots on my legs from the chemicals and insulation that came off the walls at those jobsites.” Average news-watchers who think they have a grasp on the immigration debate may well find these stories, speaking for millions of invisible American residents, no less than revelatory.”Publishers Weekly (starred review)