VICKY SWANKY IS A BEAUTY 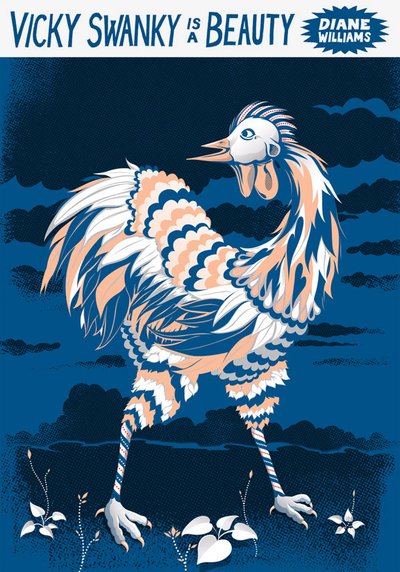 In Vicky Swanky Is a Beauty, Diane Williams lays bare the urgency and weariness that shape our lives in stories honed sharper than ever. With sentences auguring revelation and explosion, Williams's unsettling stories—a cryptic meeting between neighbors, a woman's sexual worries, a graveside discussion, a chimney on fire—are narrated with razor-sharp tongues and naked, uproarious irreverence.

These fifty stories hum with tension, each one so taut that it threatens to snap and send the whole thing sprawling—the mess and desire, the absurdity and hilarity, the bruises and bleeding, the blushes and disappointments and secrets. An audacious, unruly tour de force, Vicky Swanky Is a Beauty cements Diane Williams' position as one of the best practitioners of the short form in literature today.

Check out the McSweeney's Books Preview and the Q & A with Diane Williams.

"Let's hear it for the magnificent Diane Williams, one the wittiest and most exacting writers of our time. Her fictions are fervid endorsements of terrible, joyous life. But that’s not quite right, because like all great literature, they are life. Well, you figure it out. All I know is that this book is an amazement, composed with a stricture that guarantees splendor."
—Sam Lipsyte

"She is one of the very few contemporary prose writers who seem to be doing something independent, energetic, heartfelt."
—Lydia Davis

"The uncanny has met its ideal delivery system: the stories of Diane Williams."
—Ben Marcus

"These stories are the Giacometti walking man, the Cornell box, that extraordinary object born out of a genius for expressing the inner murmur of the mind. Each page is like throwing open the window in an electrical storm—strange sky, air full of voltage, and inside, a square of brave. Diane Williams is hilarious, brilliant, eccentric, powerful, and, luckily, ours."
—Deb Olin Unferth

"Vicky Swanky is a Beauty and Diane Williams is a genius. She is also a hero who 'resurrect(s) glee' in the face off with mortality. Her stories are sensationally complex; sorrow and hilarity, melancholy and wonder mingle, rendering this surpassingly winning collection, her seventh, quite extraordinary."
—Christine Schutt

"'Vicky Swanky' is Williams at her best, shaking us awake again to the persistent strangeness of human life."
—Jenny Hendrix, The Boston Globe

"The shorts in Diane Williams's Vicky Swanky Is a Beauty (McSweeney's) emit an unsettling brilliance, becoming, on repeated readings, even stranger and more revelatory."
—Vanity Fair

“There is also the pleasure of Williams’s sentences…dense and different. They pop. They’re part of what makes Vicky Swanky Is a Beauty so enjoyable.”
—ZYZZYVA

“Williams’s steadfast devotion to keep experimenting has yielded another highly entertaining collection that defies any contrary urge to settle down.”
—The National

“WIlliams packs elegance and drama into [her] stories… Airy and breathless, yet sturdy… like reportage from a dream.”
—Amanda DeMarco, Dalkey Archive Review of Contemporary Fiction