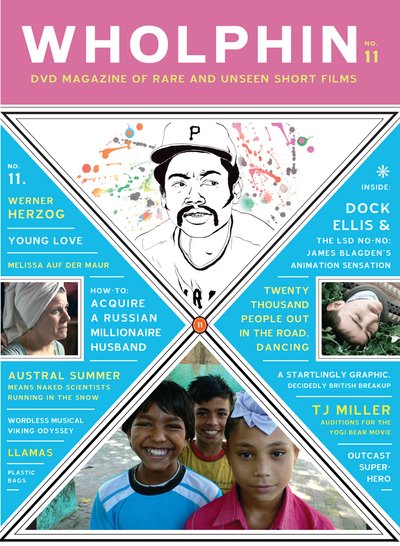 Wholphin No. 11 features Werner Herzog giving a voice to a lovelorn plastic bag in search of his Maker, a shocking documentary about a Russian finishing school for the modern-day gold digger, the Sundance 2010 Short Award winner, a Viking odyssey, the most humiliating break up of all time, Dock Ellis, Reggie Jackson, Yogi Bear and much more.

The Six Dollar Fifty Man
Sweet tale of a young Australia boy who is outcast and bullied by the other kids at school, but the affections of one little girl saves him.

Bitch Academy
Documentary about a man who teaches a class instructing Russian women on modern day gold digging & how to marry a millionaire.

Can We Talk?
A British guy is breaking up with his girlfriend when she tells him that his privates smells bad. He cries and begs her to take him back. Appalling and hilarious.

Wagah
Documentary about the ceremony held daily at the only checkpoint between India and Pakistan. 20,000 gather to celebrate.

Dock Ellis & the LSD No-No
Animated documentary about the time Dock Ellis pitched a no hitter while tripping on acid.

Wolf Ticket
Documentary/interview with Dock Ellis recounting the time he beaned Reggie Jackson in the head.

Out Of Our Minds
Visual and musical Viking odyssey from Melissa Auf der Maur, of HOLE.

Young Love
A guy is running away from his girlfriend who just gored him with kitchen cutlery. But in the end he still loves her! Film ends in a field of llamas.

Southern Exposure
Three physicists go for a jog in -30 degree weather at the South Pole, naked.

TJ Miller Auditions for Yogi the Bear
An actor practices his audition for Yogi Bear with a real live bear.