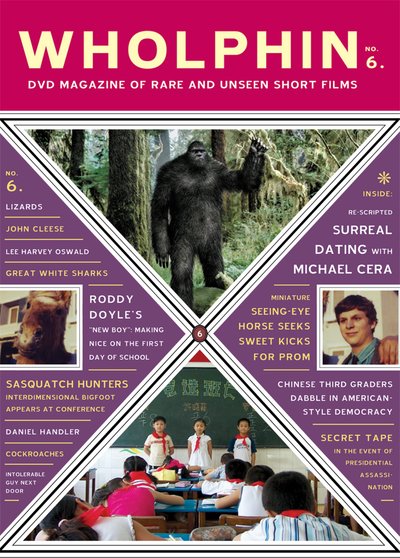 Wholphin No. 6 features a documentary about a class of Chinese third graders who hold a democratic election for classroom monitor and in the process end up hilariously, if unintentionally, mocking three hundred years of American politics; a beautifully black, comic exploration of 70s England that isn't, but could easily be, the prequel to A Clockwork Orange; a surreal dating short starring Michael Cera, with alternate audio versions featuring John Cleese and Daniel Handler; stunning footage of rarely-seen tropical reptiles and insects that are amazingly beautiful to watch, even when they're eating each other head first; as well as films featuring great white sharks, America's top Bigfoot hunters, and a miniature seeing-eye horse.

PLEASE VOTE FOR ME
Excerpt from the Documentary, China/South Africa
Directed by Weijun Chen
32:00 minutes

BIGFOOT: A BEAST ON THE RUN
Excerpt from the Documentary, U.S.A.
Directed by David Thayer
16:00 minutes

ON THE ASSASSINATION OF THE PRESIDENT
Short Film, U.S.A.
Directed by Adam Keker
6:00 minutes