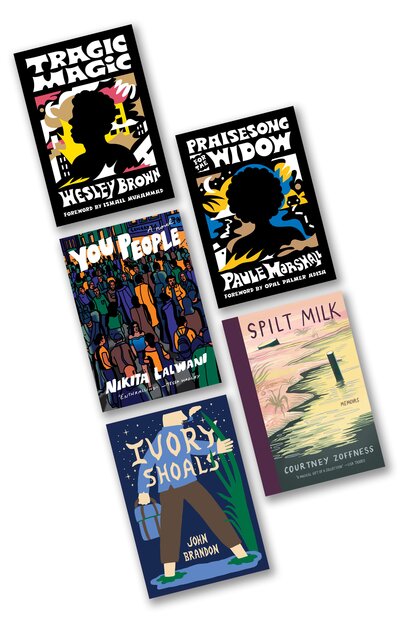 Congratulations everybody, you’ve made it past the halfway point of another year of our tumultuous early 2020s. To celebrate, take a load off, breathe in deep, and dig in to no fewer than five amazing books from your friends at McSweeney’s Publishing.

Included here you’ll find acclaimed memoirs, a captivating literary import from the UK, an unforgettable voyage across post-Civil War Florida, and TWO works of brilliant late-mid 20th Century Black literature ripe for rediscovery. Bring home five stunning hardcovers books for one unbeatable price, as you get ready for the rest of the year ahead.

“Spilt Milk explores the physicality of the body and how generational memory, anxiety, and disappointment entwine within us to conceive life. These are essays about pain. About belief. About desire… a window into the experience of how we both inherit and pass on different parts of ourselves.”
—Los Angeles Review of Books

Tragic Magic is the story of Melvin Ellington, a.k.a. Mouth, a Black, twenty-something, ex-college radical who has just been released from a five-year prison stretch after being a conscientious objector to the Vietnam War. Brown structures this first-person tale around Ellington’s first day on the outside. Although hungry for freedom and desperate for female companionship, Ellington is haunted by a past that drives him to make sense of those choices leading up to this day. Through a filmic series of flashbacks, the novel revisits Ellington’s prison experiences, where he is forced to play the unwilling patsy to the predatory Chilly and the callow pupil of the not-so-predatory Hardknocks; then dips further back to Ellington’s college days, where again he is led astray by the hypnotic militarism of the Black Pantheresque Theo, whose antiwar politics incite the impressionable narrator to oppose his parents and to choose imprisonment over conscription; and finally back to his earliest high school days, where we meet in Otis, the presumed archetype of Ellington’s “tragic magic” relationships with magnetic but dangerous avatars of black masculinity in crisis. But the effect of the novel cannot be conveyed through plot recapitulation alone, for its style is perhaps even more provoking than its subject.

From the outside, Pizzeria Vesuvio seems just like any other pizza place in West London: a buzzy, cheerful Italian spot on a street where cooks from Sri Lanka rub shoulders with waitstaff from Spain, Georgia, Wales, Poland, and more. But upstairs, on the battered leather sofas, lives are being altered drastically and often illegally, as money, legal aid, safe passage, and hope are dealt out under the table to those deemed worthy. Set in the opening years of the 21st century, against the backdrop of the Sri Lankan civil war and its outpouring of refugees to Britain, You People asks the big questions at a time of bewildering flux. What price do we put on life, on freedom, and the right to love in an age defined by seismic political change?

“Lalwani has a knack for close observation of people: their mannerisms and motivations, the way they relate to each other in different situations… Crucially, though, pain is not the defining experience of these characters… Fiction is not a blueprint, but it can be a gilded mirror, or a four-dimensional map. Living, loving, dying—You People is an elegant work of all three.”
—The Seattle Times

In the tradition of Mark Twain and Cormac McCarthy comes this distinctly American, pulse-quickening epic from the acclaimed author of Citrus County and Arkansas. Twelve-year-old Gussie Dwyer—audacious, resilient, determined to adhere to the morals his mother instilled in him—undertakes to trek across the sumptuous yet perilous peninsula of post-Civil War Florida in search of his father, a man who has no idea of his son’s existence. Gussie’s journey sees him cross paths with hardened Floridians of every stripe, from the brave and noble to a bevy of cutthroat villains, none worse than his amoral shark of a half brother. Will he survive his quest, and at what cost?

“Ivory Shoals is a bracing mix of Florida history and fleet adventure, livened with dry wit and a tender regard for its characters. Take a walk across the state with Gussie — you won’t regret it.”
—Tampa Bay Times