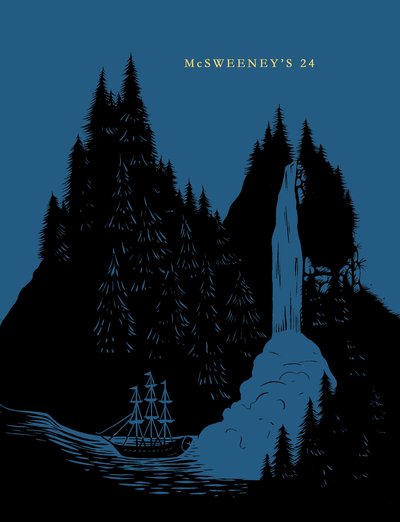 With a special section on Donald Barthelme, including remembrances from Ann Beattie, David Gates, and Oscar Hijuelos, and some of Barthelme’s barely published and never-collected early work, and a highly theoretical but potentially amazing Z-binding that we can’t describe very well here, or even to each other, McSweeney’s 24 will never be mistaken for anything else. (Except possibly the June 1978 issue of Popular Mechanics.)

And—and!—it just so happens that Jonathan Ames's noir/inept detective story, first published in this issue, is now an HBO series, starring Jason Schwartzman, Ted Danson, and Zach Galifianakis. No word yet on Showtime picking up the Barthelme section, but we're optimistic.

Christopher R. Howard - How to Make Millions in the Oil Market
The Land Rover bounced along the unpaved road past flat, sandstone buildings, their symmetry broken only by the intermittent onion-domed mosque.

Joe Meno - Stockholm, 1973
Out on parole, Jan Olsson walks into the Kreditbanken at Norrmalmstorg, located within the central banking district of Stockholm, Sweden; he has a small pistol in the pocket of his jacket.

Jonathan Ames - Bored to Death
The trouble happened because I was bored.

Aaron Gwyn - Look at Me
He was sitting there eating when he looked up and saw the pickup approaching the large glass window fronting the cafeteria––a row of tables and elderly couples drinking coffee––and he thought, That thing is getting close, and he had just thought this when the pickup popped the cub, and came onto the sidewalk, and some of the people looked over, and one woman screamed.

Philippe Soupault (trans. Robin Walz) - Death of Nick Carter
It was Four in the Morning.

SIDE 2: Come Back, Donald Barthelme

Introduction by Justin Taylor:
If you go to a decent-sized bookstore, it’s likely you’ll find the Penguin Classics editions of Donald Barthelme’s 60 Stories and 40 Stories. Maybe you’ll find Farrar, Straus, and Giroux’s edition of The Dead Father. If it’s a store hip enough to be up on its Dalkey Archive titles, you might score reissues of the late novels The King and Paradise. (Often these are considered his “lesser” works, though the worst that can be said of them is that they are merely very, very good.) There’s an outside chance that you’ll find the current Scribner edition of Snow White, which gets the date of his death wrong, by two years, on the back cover.

Donald Barthelme - The Bed
PROBLEM: a new bed for an old wife.

Donald Barthelme (writing as David Reiner) - Pages From The Annual Report
William Elderly Baskerville posed with the ink bottle in his hand.