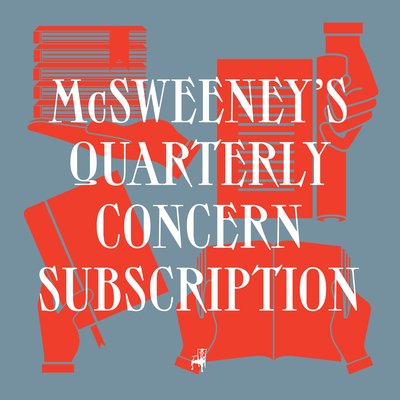 A three-time winner and nine-time finalist of the National Magazine Award for fiction. Get caught up here.

McSweeney’s Quarterly Concern began in 1998 as a literary journal that published only works rejected by other magazines. That rule was soon abandoned, and since then McSweeney’s has attracted some of the finest writers in the world, from George Saunders and Lydia Davis, to Chimamanda Ngozi Adichie and David Foster Wallace. Recent issues have featured work by Tommy Orange, Hanif Abdurraqib, Lisa Taddeo, Mimi Lok, and Lesley Nneka Arimah. At the same time, the journal continues to be a major home for new and unpublished writers; we’re committed to publishing exciting fiction regardless of pedigree.

Each issue is completely redesigned—a unique work of art. Some issues are hardcovers, some are paperbacks, one issue came in a box shaped like a sweaty human head, one was disguised as a bag of party balloons, one looked like a pile of junk mail.

McSweeney’s has won multiple literary awards, including three National Magazine Awards for fiction, and has had numerous stories appear in The Best American Magazine Writing, the O. Henry Awards anthologies, and The Best American Short Stories. Design awards given to the quarterly include the AIGA 50 Books Award, the AIGA 365 Illustration Award, and the Print Design Regional Award.

Here’s what we’ve got up our collective sleeve for the future:

McSweeney’s Issue 68
Coming this October, the sixty-eighth issue of our National Magazine Award-winning McSweeney’s Quarterly features stories of duplicity and deception, double lives and secret histories, waiting for you underneath a cover by Italian artist Daniele Castellano (inspired by the Roman god Janus, depicting duality in its many forms). Inside, readers will find an essay by Alejandro Zambra on soccer sadness; an epic, time-bending short story from Carmen Maria Machado; and new work from National Book Award finalist Lisa Ko. Like all editions of McSweeney’s, this issue includes work from established contemporary talents (Catherine Lacey, Andrew Martin, Laura van den Berg) alongside fresh emerging voices (Stephanie Ullmann, Hallie Gayle). Readers will find new translations of Peruvian writer Santiago Roncagliolo and Italian novelist Andrea Bajani, and a little diamond of flash fiction by James Yeh. Compiled by visiting editor Daniel Gumbiner, McSweeney’s Issue 68 offers a host of delights and surprises, from some of the world’s best writers.

And then?
Keep an eye out for three more thrilling and innovative collections of the kind of cutting-edge literary content readers of McSweeney’s Quarterly Concern have come to expect for over two decades.

“McSweeney’s is so much more than a magazine; it’s a vital part of our culture.”
—Geoff Dyer, McSweeney’s contributor and author of Jeff in Venice, Death in Varanasi and Otherwise Known as the Human Condition

“Some magazines are comfort reads. We turn to them because we can almost predict, issue to issue, what and even who will appear in them. But others, like McSweeney’s, are challenge reads. They’re feverishly inventive, discomfortingly surprising, and therefore among the best reminders that we are actually alive. I love shouting at McSweeney’s, laughing with it, and rolling my eyes at myself while the magazine reads me like a deceptively perceptive carnival psychic.”
—John D’Agata, author of Halls of Fame and About a Mountain

IMPORTANT LOGISTICAL INFORMATION: Subscriptions placed by November 15 will begin with McSweeney’s 68. All subscriptions to McSweeney’s Quarterly automatically renew after four issues, at a reduced price of $75. In the event of any future rate changes, we will notify you via email. If you’d like to cancel your subscription at any time prior to its auto-renewal, you can log in to your account and adjust your subscription settings. Or send an email to custservice@mcsweeneys.net with the subject line “End Quarterly Autorenew.” Refunds will be accepted only up until the first issue of your renewal is shipped. If you’d like to give the Quarterly Concern as a one-time gift, purchase a gift subscription here. Any subscription purchased with the “gift” option marked at checkout will not be enrolled in autorenew.