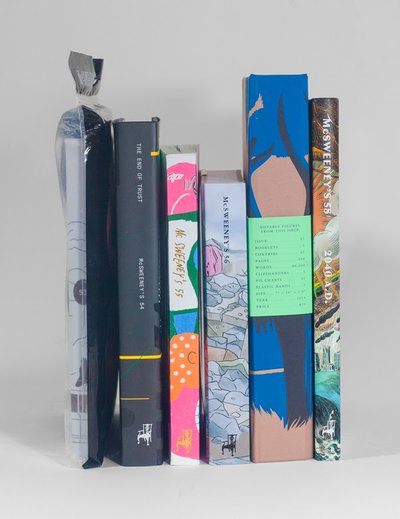 McSweeney’s Quarterly Concern began in 1998 as a literary journal that published only works rejected by other magazines. That rule was soon abandoned, and since then McSweeney’s has attracted some of the finest writers in the world, from George Saunders and Lydia Davis, to Chimamanda Ngozi Adichie and David Foster Wallace. Recent issues have featured work by Tommy Orange, Hanif Abdurraqib, Lisa Taddeo, Mimi Lok, and Lesley Nneka Arimah. At the same time, the journal continues to be a major home for new and unpublished writers; we’re committed to publishing exciting fiction regardless of pedigree.

Each issue is completely redesigned—a unique work of art. Some issues are hardcovers, some are paperbacks, one issue came in a box shaped like a sweaty human head, one was disguised as a bag of party balloons, one looked like a pile of junk mail.

McSweeney’s has won multiple literary awards, including three National Magazine Awards for fiction, and has had numerous stories appear in The Best American Magazine Writing, the O. Henry Awards anthologies, and The Best American Short Stories. Design awards given to the quarterly include the AIGA 50 Books Award, the AIGA 365 Illustration Award, and the Print Design Regional Award.

Here’s what we’ve got up our collective sleeve for the future:

McSweeney’s 59
McSweeney’s rings in the 2020s with a brand-new, oddly shaped paperback issue of our National Magazine Award-winning McSweeney’s Quarterly Concern. Gaze inside this short-covered book to find: stories about cultish acting classes and human remains and eerie parties in dusty parlors; the conclusions of Issue 57’s cliffhanger stories by Oyinkan Braithwaite, Brian Evanson, and Mona Awad; essays on historic ACLU cases by the likes of Jacqueline Woodson and Charlie Jane Anders; letters from Brandon Hobson on an armadillo incarnation of Andrew Jackson and Jenny Slate on the indignity of game nights; a spread of full-color photographs by Tommy Kha; and so much more. Join us, hand-in-hand, as we enter a whole new era.

McSweeney’s 60
McSweeney’s 60 features eight original stories, each accompanied—a first, for us—by cinematic, full-color photography from award-winning photographer Holly Andres. There are tales of healing powers discovered in a neighborhood market and retiring baseball stars, of ill-fated father-daughter float-plane trips and a romance with the ghost of an old Hollywood heartthrob. A not-to-be-missed, oversized issue, this is one you’ll want to keep preserved in a temperature-controlled room for generations to come.

And then?
An indispensable collection of writing and art and comics and letters (and more!) from the most exciting Queer voices working today, guest edited by Patty Yumi Cottrell (Issue 62); an innovative issue exploring the relationship between print and audio made in partnership with Radiotopia; and more collections of the kind of cutting-edge literary content readers of McSweeney’s Quarterly Concern have come to expect for over two decades.

IMPORTANT LOGISTICAL INFORMATION: Subscriptions placed before June 1 will begin with Issue 59. All subscriptions to McSweeney’s Quarterly automatically renew after four issues, at a reduced price of $75. Before the start of each four-issue renewal, and in the case of any future rate changes, we will notify you via email. If you’d like to cancel your subscription at any time prior to its auto-renewal, you can log in to your account and adjust your subscription settings. Or, send an email to custservice@mcsweeneys.net with the subject line End Quarterly Autorenew. Or, call (415) 642-5609. Refunds will be accepted only up until the first issue of your renewal is shipped. If you’d like to give the Quarterly Concern as a one-time gift, purchase a gift subscription here. Any subscription purchased with the “gift” option marked at checkout will not be enrolled in autorenew.